New Delhi: Pakistan Cricket Board (PCB) Chairman Shahryar Khan on Tuesday met Indian Premier League (IPL) chief Rajiv Shukla at his residence in what was described as a “courtesy call” in the backdrop of the furore surrounding talks for a possible resumption of Indo-Pak bilateral cricket ties. Shahryar is here to discuss the proposed bilateral series between the two countries in December with BCCI officials. The PCB chief was to hold talks with BCCI President Shashank Manohar in Mumbai on Monday but the plan had to be aborted after angry Shiv Sena activists stormed the Board office to protest any move to resume cricketing ties between the neighbours. They shouted slogans inside Manohar’s office. ALSO READ: India-Pakistan bilateral cricket: Shahryar Khan trying best to meet Arun Jaitley

“It was a courtesy call, we exchanged pleasantries, there were no official talks. Whatever talks happen will be done by the BCCI President, he will take a final call on these matters,” Shukla said after meeting Khan. ALSO READ: Pakistan Cricket Board (PCB) under pressure to reconsider cricket ties with India

“The series, whether it will happen or not, where it will happen, how it will happen, will be decided only after talks, if at all the talks take place. We should not jump to conclusions. Process of dialogue should be on. When that dialogue will happen is upto the BCCI President,” he said. Shukla once again condemned the protest staged by Shiv Sena on Monday.  “Storming the BCCI office and creating a situation where talks cannot happen is not right,” he said.

The PCB Chairman is seeking a meeting with Union Finance Minister Arun jaitley to discuss the matter but there is no confirmation on that as yet. He is also expected to meet former union minister and NCP leader Sharad Pawar.

Khan had landed in Mumbai on Monday with his PCB colleague Najam Sethi, who left the country after Sena’s protests. “Mr Najam Sethi has flown to Dubai. I am trying to meet Mr Arun Jaitley and discuss the issue with him. Unke saath Milne ki koshish jaari hain (Trying my best to meet him),” Khan told PTI over phone from the city hotel where he has put up.

It was Manohar, who had invited Khan for talks on the much-anticipated series. There was speculation that the two neighbours would play either a bilateral series in the UAE or agree to a possible triangular series in December also involving Bangladesh. However, the series seems highly unlikely after BCCI secretary Anurag Thakur said that conditions have to improve to hold talks and only then a bilateral series could be a possibility.

Video: Look, how Bappi Lahiri stumped Michael Vaughan and other ‘Masters’ in Dubai! 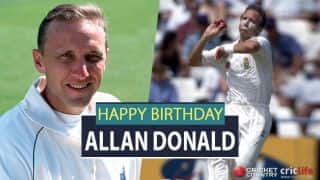