There is no substitute for experience and the Proteas skipper is glad to get his senior-most pro back in the side.

South Africa landed in India with truckloads of confidence as they registered an emphatic series win against a formidable Australian team at home. This was Proteas’ first international series win after almost a year. Captain Quinton de Kock wants his team to carry on the same confidence and form in the upcoming three-match ODI series against India, beginning March 12 in Dharamsala.

Ahead of the limited-overs rubber, de Kock urged the senior members of his team to own up responsibility as well as guide the youngsters during the ODIs against second-ranked India. The 27-year-old also feels the return of former captain Faf du Plessis will be vital for his side and will hold the visitors in good stead in the upcoming ODIs.

Du Plessis was rested for the ODI series against South Africa at home which the Proteas won 3-0. “Obviously, Faf (du Plessis) has come back. He plays a big role for us from the leadership point of view. He is here to help out the younger guys in the team. He adds a lot of value for us. He also knows he has lot of value to give to this team. His experience will be a big help for us in this series,” De Kock said on the eve of the first ODI on Wednesday.

“We understand that we are coming here with quite an inexperienced side in these conditions but it’s important Faf, me, David Miller to help out these guys around, lead the way. Pass on our knowledge to the youngsters.”

There is no substitute of experience and the Proteas skipper is glad to get his senior-most pro back in the side.

“Just glad to have him back with us. We are undecided where he is going to bat at the moment but we will come up with the decision later,” de Kock said.

The Proteas skipper said the visitors are brimming with confidence coming into the tour after drubbing Australia back home. The challenge would be different

“India is an unbelievable team, They have got great balance, but I am sure we are also coming here with a lot of confidence,” De Kock said.

De Kock said left-arm seamer Beuren Hendricks has recovered from his illness and is available for selection but batsman Temba Bavuma is uncertain as he is yet to fully recover from the hamstring injury.

“Beuran was unfortunately ill back in South Africa but he is back up for selection. Temba we will find out today but I don’t think he will be ready, I am not sure,” the left-hander said. 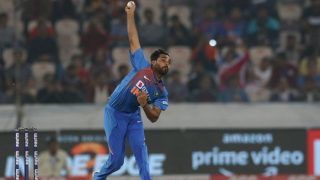