South Africa were comfortably chasing the 93-run target when the incident broke out at the Baramati Stadium.

The second Twenty20 International (T20I) between India and South Africa at the Barabati Stadium in Cuttack on Monday witnessed bad behaviour by the spectators when there were bottles being thrown near the boundary during the South African innings. The visitors were cruising at a score of 64 for 3 in 11 overs during their chase of 93 runs when the incident took place. India were outplayed by the South African bowling attack, getting bowled out for a meagre 93 as a result, with several members of the top-order. South Africa, on the other hand, were in the pole position throughout the chase, despite losing three wickets. Live Cricket Scorecard: India vs South Africa 2nd T20I at Cuttack

The incident is reminiscent of the 1996 World Cup semi-final between India and Sri Lanka at the Eden Gardens in Kolkata, where the Indians put up a pathetic display with the bat during their chase of the 252-run target set by the Lankans. The scorecard read 120 for 8 in the 35th over when the spectators resorted to hooliganism, causing the match officials to award victory to Sri Lanka. READ: Eden Gardens brings shame to nation in 1996 World Cup semi-final

The crowds may be upset with the way India played this evening but the way they are behaving is very disappointing. #IndvsSA

India earlier put up a shambolic performance after losing the toss, getting bowled out for just 92. India followed up their 199-run score in the first T20I with a terrible display in the second, losing wickts in a heap as the South African bowlers stuck to their basics and let India implode. Rohit Sharma and Suresh Raina finished as top-scorer for the hosts with 24-ball knocks of 22. Albie Morkel was the pick of the South African bowlers, taking three for 12 in four overs in his comeback match. Live Cricket Blog: India vs South Africa 2015, 2nd T20I at Cuttack 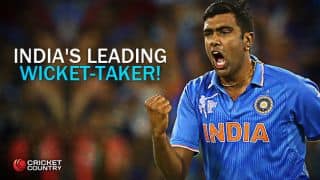