India opted for the likes of Washington Sundar, Rahul Chahar and Krunal Pandya for the three-match T20I series against West Indies and chose to retain the trio for the South Africa T2oIs at home.

India opted for the likes of Washington Sundar, Rahul Chahar, Ravindra Jadeja and Krunal Pandya for the three-match T20I series against West Indies and chose to retain the trio for the South Africa T2oIs at home.

Kohli said that the duo’s weakness with the bat prompted the team management to try out some other options.

“That was one of the reasons also to give opportunities to the guys who have done well in the domestic format and the T20 format and in the IPL also. So I think it’s about finding the best balance that we can as a side and not necessarily stick to one kind of combination. If all teams across the world are batting till No. 9, 10, why can’t we,” Kohli said.

Kohli highlighted how the Indian team management had come under scrutiny when Chahal and Kuldeep were picked in the side, replacing R Ashwin and Ravindra Jadeja.

“So, you need to take those calls at one stage. Bringing those guys (Chahal and Kuldeep) at one stage was also not taken well by people. Look, whatever decisions are made, are to make sure that the team has the best and strongest balance that we can have approaching the T20 World Cup that we have next year,” Kohli said.

With a lot of new faces trying to prove their mettle, the skipper outlined the specifics that he is looking in some of the players going forward in the season.

The Indian skipper also said that with the next year’s 2020 T20 World Cup in sight, he will be looking at a certain players going ahead in this season.

“As far as the road map is concerned, whenever there is a world tournament coming up, it is like a milestone and you start preparing from backwards (back calculate matches). I think every team will go though same process before T20 World Cup,” said Kohli.

“These are opportunities where we can try various combinations with new people around — check their ability, character, composure to perform at international level. From that point of view, it is exciting for a captain to try different players and check out combinations. We have all come through that process and I feel happy when I see these new faces emerging, trying to express themselves,” concluded Kohli. 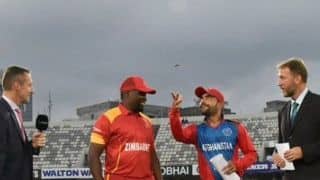