The national team’s captaincy came his way quite early and in an unusual manner but Aiden Markram looks all prepared to deal with the “good pressure” by taking along the seniors in the side. In a shocking move, the 23-year-old two-match old batsman was named captain for the remaining five ODIs against India owing to Faf du Plessis withdrawal due to a finger injury.

“It’s a big honour. The selectors showing confidence in me to take over, it means quite a bit. It’s a super humbling experience, but yes, we’re going to need to do this for Faf, I believe. I think it’s something that you can’t take for granted. I really enjoy captaining but it’s an unexpected thing. Like I said it was a freak incident with Faf and this has all just happened so quickly. I managed to sleep, yeah. It’s going to be an additional pressure to deal with but I believe it’s a good pressure. You get good and bad sort of pressures, and for me it s really a pressure that hopefully I can thrive on,” Markram said ahead of the second ODI at Centurion.

The pitch at Superspot Park looks an ODI batting beauty and the spinners will come into play again. Markram said that he might look to make some changes.

“Generally it’s a good wicket at the SuperSport Park. We’re going to look more in depth at it this afternoon and then tomorrow morning and then make a decision. The decision will be made completely on what will benefit our side, and not on how India play. I believe there are quality batsmen in our middle order and it’s just about taking responsibility. Obviously we’ve had to adjust our game plans just a touch going into this game, but it wasn’t addressing any sort of problem, I don’t think,” Markram added about facing the Indian wrist-spinners.

Talking about possible batting changes, the skipper revealed, “Hashim Amla has been so good at the top of the order for us. He just provides that calmness and hits good cricket shots when the field is up, so he s a massive asset up at the top for us. I don’t think there is any need to adjust the batting lineup per say. I just think players need to develop some nice and strong game plans. I think it would make sense for myself to go up to three. I’ve spent most of my career opening the batting. From No. 3 we’re not 100 per cent sure of the side just yet. That selection meeting still needs to take place. But yeah, it would make sense for me to go up to No. 3. From there onwards there’s plenty of experience in JP Duminy and David Miller. So we’ll organise and go according to how the game dictates tomorrow, Markram told.

When asked about his thoughts on the issue, Markram replied, “Even if we watch how Shamsi has been operating in training today and his form coming into the ODI series, he’s been top drawer. And he really is putting his hand up for selection. It’s a temptation of course, especially watching how their bowlers have bowled. But like you said, it’s different conditions in Durban to what it is in the Highveld. It’s something to talk about for sure.

The key for the young captain, Markram, will be handling the pressure of a mighty opponent in India, as well as managing former captains and senior players on the field. Markram said that he had taken enough tips from du Plessis and will be looking up to Amla for further support.

“Faf’s sort of taken me under his wings since I ve been involved in the environment. I ll keep sending messages on and off the field, asking for advice, asking for any hints. But at the end of the day, it s going to be my decision to make on the field though. Fortunately, there’s plenty of experience within the squad and it won’t be a decision made just by myself. I’ll definitely consult the senior players, obviously for the better interest of the side as well. Yes it can be an intimidating thing (handling seniors). But the culture in the team is so good it allows for a young player like myself to go and engage with a guy like Hashim, who s a legend of the game. It makes it a lot easier for me, it s not something I see as intimidating,” concluded Markram. 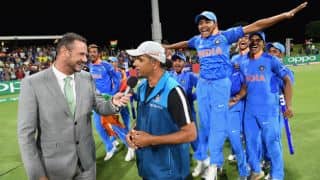 India U-19 lucky to have Rahul Dravid as coach: Ajinkya Rahane 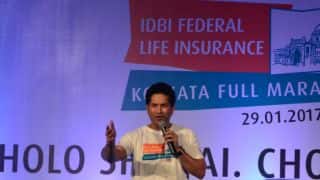