7.27 pm: Same situation around, fans slowing moving out of the stadium!

7.11 pm: The rain did reduce for some time, but it has picked up again and boy, has it picked up really bad! Now, certainly impossible scenes around for any play!

6.39 pm: The rain has returned, in fact, now, it looks like a storm! It’s absolutely bucketing down in Dharamsala.

6.33: It’s official! The toss is delayed as inspection is underway, but the rain has returned!

Only a slight drizzle now, which looks like it could end soon, but there is a lot of water on the covers and on the ground. Cut off is 21.46 so lots of time

5.55 pm: We may be in for a delayed start, the BCCI has confirmed that it’s raining in Dharamsala.

Raining in Dharamsala at the moment 😔

As both, India and South Africa begin their 2020 T20 World Cup preparations in the series opener of the three-match Twenty20 Internationals on Sunday, it appears that the weather gods may not let that happen. According to PTI, a sharp spell of afternoon thundershowers lashed Himachal hill city, Dharamsala ahead of the first T20 International. According to the weather forecast, scattered thundershowers are expected during the day.

Absolutely bucketing down in Dharamshala……You’ve just got to hope it will stop!

Renowned cricket commentator Harsha Bhogle too revealed that Dharamsala has received heavy rainfall and it continues to pour. “Absolutely bucketing down in Dharamshala……You’ve just got to hope it will stop!” he wrote.

While the match starts at 7 pm, the HPCA Stadium is equipped with quality drainage facility and can prepare the ground for a full 40-over game even if the rain stops by 5 pm.

The minimum is a five-over per side encounter for it to be official game. 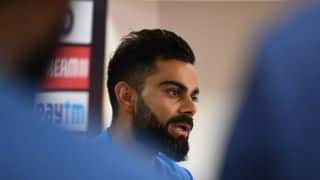 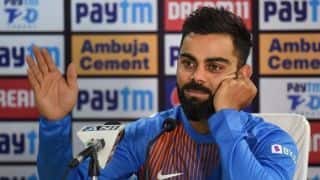