This series was considered as India's best chance to beat South Africa in a test series at their home turf. New Delhi: South Africa is considered as the final frontier for the Indian team and after the Cape Town test got over yesterday, it will continue to remain that way. Legends like Sachin Tendulkar, Sunil Gavaskar, Kapil Dev, current head coach Rahul Dravid achieved a lot of milestones in their careers, however, a test series win in South Africa was not one of them.

This series was considered as India’s best chance to beat South Africa in a test series at their home turf. India were 1-0 up in the series. Batters were in form, bowlers were breathing fire, slip catching was terrific, then what wrong exactly. Here are six reasons why India lost the series against South Africa.

Former Vice captain of India, Rahane dismal outing continued in South Africa. Apart from just one fifty in a losing cause at Johannesburg, there was nothing for the Mumbai lad to cheer in the series. There are chances that he might get replaced by Shreyas Iyer or Hanuma Vihari.

Cheteshwar Pujara showed intent while batting which was missing in his last few innings. However, short ball has been used as a poised weapon against the otherwise gritty player. With Shubman Gill waiting in the pipeline, he is running out of chances.

It is no secret that India failed to figure out players like Keegan Petersen and Marco Jansen who were instrumental in winning the test series.

Indian team may have been complacent while choosing the best XI players. India A players like Priyank Panchal, Hanuma Vihari may have come in handy in place of out of form players like Rahane and Pujara.

The controversy may have distracted players and some of them might have lost their focus in the game. Raising the voice against Supersport was right or wrong, that is debatable. However, controversies like these have always been a distraction for the players. 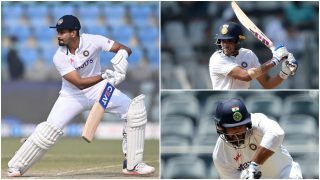