The second Test gets underway on January 13 at Centurion.

The first Test between India and South Africa witnessed a fast bowler’s paradise on offer at Cape Town. It had pace and movement on offer for bowlers to exploit, while batsmen had equal bounce to make good use of. The curator for the Centurion Test, Bryan Bloy has promised to produce a similar pitch for the second Test.

Speaking exclusively to Cricketnext, Bloy said: Coming to the wicket, well you will get pace and bounce. That is the true nature of the wicket here at SuperSport Park. You can also expect a bit of sideways movement, but primarily pace and bounce.”

He further added, Going into the later stages of the game, you might also start seeing some invariable bounce as it is very dry here and that would or could make the pitch crack up. But that would not really be for assistance to the spinners. Wickets at SuperSport Park over the years have turned, not that it has not, but that would be more from the rough created by the bowlers.

Bloy was involved in a animated talk with South African players. On being quizzed about it, he said :”Naah, just showing them around the wicket as they wanted to have a look at it. Don’t worry, I would say the same things to the Indian team if they ask me (smiles again).”

The second Test gets underway on January 13 at Centurion. 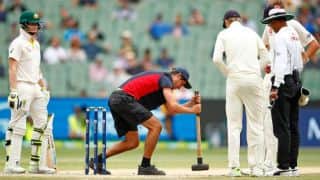