Virat Kohli-led India will take on Angelo Mathews Sri Lanka in the sixth and final group-stage match in of the tri-series at Port of Spain on Tuesday. The fate of all three sides will depend on the outcome of the match between West Indies and Sri Lanka that got pushed to its reserve day on Monday, after rain played spoilsport. 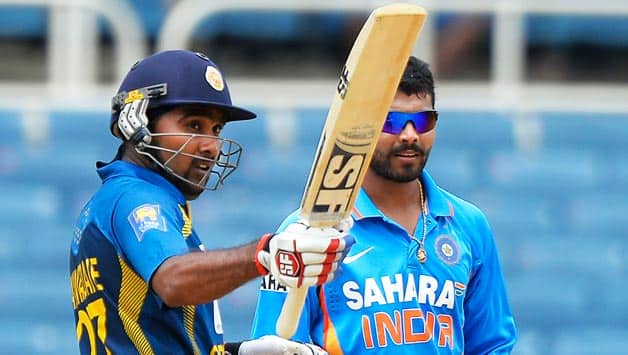 Virat Kohli-led India will take on Angelo Mathews Sri Lanka in the sixth and final group-stage match in of the tri-series at Port of Spain on Tuesday. The fate of all three sides will depend on the outcome of the match between West Indies and Sri Lanka that got pushed to its reserve day on Monday, after rain played spoilsport.

If the West Indies beat Sri Lanka on Monday, they will go through to the final with the winner between India and Sri Lanka in Tuesday’s fixture going in as the second finalist. However, if Sri Lanka, who resume at 60 for three from 19 overs, manage to pull off a victory, the table will then be wide open. A win will take Sri Lanka to the top spot of the table with nine points (without a bonus point) with West Indies at second with nine points and an inferior net run rate. In this situation, India, who has five points from from its three matches will need to beat Sri Lanka by a certain margin to usurp the West Indies to take the second spot. If they can do it with a bonus point, then India will go through to the final as the league leaders.

As far as form is concerned, Kohli is in good nick with the bat and will be eager to face an opponent that he has been devastating against. The new set of openers, Rohit Sharma and Shikhar Dhawan, have forged a potent partnership at the top as the duo have carried forward their form from the ICC Champions Trophy 2013.

The bowling unit too has been in good form, with Bhuvneshwar Kumar being the most impressive early on. His ability to turn the ball both ways has been his biggest strength. While the team will miss the services of their captain MS Dhoni, Kohli will hope his side can march on and win a series under his leadership. He will also look to put the alleged on-field clash between Suresh Raina and Ravindra Jadeja behind him and march ahead.

As far as Sri Lanka is concerned, a win over the West Indies on Monday will give them an upper hand ahead of the clash against familiar foes India. However, even if they concede the game, they will still have a chance to go through to the final.

Skipper Mathews will be buoyed by the fact that his side handed a sound thrashing to India in their previous meeting in the series. Upul Tharanga who smashed an unbeaten 174, will want to keep his form going. A lot will also depend on the experienced duo of Kumar Sangakkara and Mahela Jayawardene, who have a promising track record against their Asian rivals.

Sri Lanka’s bowling hasn’t been at its best in the ongoing tournament. Lasith Malinga will have to step up and make early in-roads if Sri Lanka have to peg back the Indians.

India suffered two early setbacks in the series but stayed alive in the tournament, courtesy Kohli’s scintillating century that paved the way for a 102-run victory over the hosts. Sri Lanka, on the other hand, have blown hot and cold throughout. They began with a loss to the West Indies and moved on to a comprehensive victory over India.

These two Asian sides have played a lot of cricket in the recent past but the clash on Tuesday could be one of their most relevant ones, if West Indies pull off their third win on Monday.