It is a good platform and opportunity for Saha to make a mark and statement.

With India scheduled to take on Sri Lanka in the first of the five-match ODI series at the Barabati Stadium in Cuttack, the organisers have only been able to sell around 20,000 tickets of the 45,000 seating capacity stadium. The tickets mainly priced between Rs. 200 to Rs. 8000 have mostly been sold.

On being asked about the reason for low ticket sale, Ashirwad Behera, Orissa Cricket Association (OCA) secretary said to The Indian Express, “Absence of star players like (MS) Dhoni and (Lasith) Malinga is a factor. But I still believe the stadium would be packed to capacity on Sunday.”

On being asked about the track at Barabati, chief curator of OCA, Pankaj Patnaik said that it is totally a new track and is surely to assist the batsmen. “This wicket has bounce and the stroke-players will enjoy it,” he said.

With over 400 runs scored during this year’s IPL match at this venue between Kings XI Punjab (KXIP) and Chennai Super Kings (CSK), the pitch surely suggests that it is indeed a batting friendly wicket. “That pitch had a little more bounce. We had prepared it that way because foreign players were involved. Batsmen from the sub-continent are more comfortable when the pitch becomes a little slower. Both India and Sri Lanka would like to play on this surface. Dew factor, however, will come into play in the second half,” he added.

Meanwhile, wicketkeeper-batsman Wriddhiman Saha, who suffered an injury to the finger during the Duleep Trophy semi-final match while playing for East Zone against South Zone, has been declared fit for the series against Sri Lanka as he passed the medical and fitness test prior to the series. A member of the team management said “Saha is fit and available for selection.” With regular captain-wicketkeeper, MS Dhoni being rested for the first three ODIs, it is a good platform and opportunity for Saha to make a mark and statement prior to the team being selected for the tour Down Under and with the World Cup round the corner. 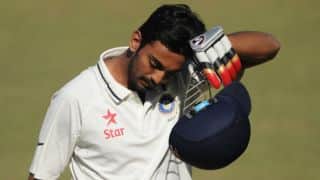