Kohli was a "little worried and annoyed” when his batsmen were throwing away their wickets.

After he powered India to a clean sweep over Sri Lanka with an unbeaten ton here today, Virat Kohli said he was a “little worried and annoyed” when his batsmen were throwing away their wickets and demanded more application from them.

Kohli made a gritty unbeaten century as a dominant India completed a 5-0 whitewash by winning the fifth and final One-day International by three wickets.

“I was a little worried and annoyed (when running out of partners). You have to understand the match situations,” Kohli said in the post-match presentation ceremony.

Opting to bat, Sri Lanka rode on their skipper Angelo Mathews‘ unbeaten 116-ball 139 to put up a challenging 286 for eight at the JSCA International Stadium Complex, before Kohli (139) guided India home with eight balls to spare.

“There needs to be more application. Akshar Patel played a composed innings, he listened to me. The ball wasn’t quite coming on. It wasn’t easy once the ball got old. I was running out of partners and that is something others need to learn from this on how to maintain composure.”

“If you want to make others to do something else, it has to start from me. I played the helicopter and it came off well, playing in MS’ hometown, it worked well.”

“You saw the character and composure of some young guys in the series. Rohit Sharma‘s knock was legendary and it won’t be bettered soon.”

Man of the Series Kohli, who struck 12 fours and three sixes in his 139-run knock, also thanked the Sri Lankan team for coming to India on a short notice to play the series.

Lankan captain Angelo Mathews, who too scored a century in the match, said, “Unfortunately we did not play good cricket once again and India did play very well.”

Mathews further said, “It was a tough wicket. I thought I needed to hang in there and build a partnership with Lahiru Thirimanne and later I had a go and it clicked. We batted pretty well and 287 was a huge score on this pitch.

“But Kohli batted very well and best of luck to them in Australia. We got to flush this out of the system as soon as possible and need to gear up for the England series.” 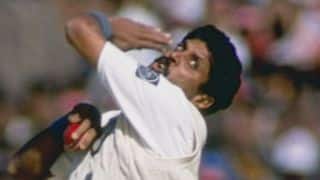