India and Sri Lanka will play the inaugural T20I at Holkar stadium., Indore on Friday.

India and Sri Lanka‘s first T20I of the three-match series was no match as the home team sailed past Sri Lanka. Thisara Perera elected to bowl first. He was of the view that dew will play a vital role, but his side’s ineffective bowling and toothless batting spoiled all plans. India posted 180 for 3 and defended the total by registering their biggest margin of victory in terms of runs. Dew was a factor, but India negated the threat by bowling stump to stump. In addition, Sri Lanka went overboard and paid the price. Ahead of the second T20I, at Holkar Stadium (Indore), the curator spelled the beans on ‘dew’.

“It was cloudy here yesterday and there is same forecast for tomorrow. In that case, dew won’t fall before 730 or 745 PM (IST) which means first 10 overs won’t be affected by dew. Still, bowling first will be a good option for captain winning the toss. We have been using a chemical which prevents grass from getting wet. It causes dew to slip. We will use the substance tomorrow as well to negate the dew factor,” said Samandar Singh Chouhan.

India and Sri Lanka will play the inaugural T20I at Holkar stadium. In September 2016, India hosted New Zealand in the maiden Test at the venue, mauling Kiwis by 320 runs. 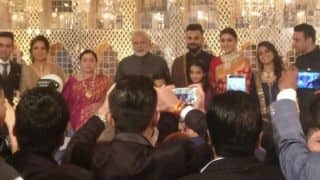