Though an inconsequential one, the match will be keenly followed by the Indian fans.

The Asia Cup T20 2016 has reached to the business end now. The finalists have been decided, as hosts Bangladesh will be taking on India on March 6 at Mirpur, Dhaka. Traditional Asian powerhouses Sri Lanka and Pakistan, who were disappointing to say the least with their performances, crashed out of the tournament in the group stages. UAE, who had a dream-run in the qualifiers, where they beat Afghanistan, Hong Kong and Oman to enter the main round, have also been eliminated after losing to all the sides. Only a couple of dead rubbers are left to be played now. LIVE CRICKET SCORECARD: India vs UAE, Asia Cup T20 2016, Match 9 at Dhaka.

First of them will be played between India and UAE on Thursday, while the second, also the last match of the tournament, will be played between Pakistan and Sri Lanka. Talking about the first game, India will look to try their bench strength by giving the likes of Pawan Negi a look-in. On the other hand, UAE will want to leave on a high. They have showed the spark of occasional brilliance so far, but it will be a great boost for them if they can beat India here. India vs UAE, Asia Cup T20 2016, Match 9 at Dhaka, Preview.

India also have a few injury issues, as openers Rohit Sharma and Shikhar Dhawan are carrying niggles while skipper MS Dhoni is having back problems, which forced the selectors to send Parthiv Patel as a back-up. It will be a good chance ahead of the big final if the seniors get some rest and the players who have been warming the bench so far get a chance. UAE, luckily, have all their players fit and available for selection. 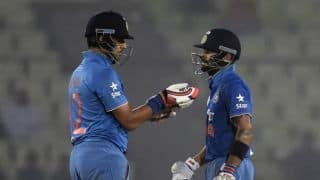