Rain may have spoiled the first ODI between India and West Indies at Guyana but it didn’t stop Virat Kohli from having some fun. During one of the rain stoppages, the India captain was spotted in quite the mood as he started dancing to the tune of the DJ as the players were waiting for play to resume.

Kohli was joined by his former Royal Challengers Bangalore teammate Chris Gayle, who was playing his 299th ODI for West Indies. The two entertained the fans even as the umpires waited to decide the fate of the proceedings. The match had several interruptions due to rain, and this particular stoppage was once the West Indies innings was underway.

Watch the video below

Things to do when rain stops play

Kohli even danced around with some of the ground staff, who did a terrific job to soak the outfield and ensure play. Later, Kedar Jadhav joined Kohli in flaunting a few of his own moves. This isn’t the first time Kohli has broken into a dance. Although Kohli dancing to the DJ was during an interval, the India captain has time and again been seen grooving in the middle of a match while fielding.

Recently during the World Cup, Kohli, on more than one occasion, did his trademark “Bhangra”. In the game against Pakistan, when Kuldeep Yadav had dismissed Babar Azam, Kohli was seen grooving near the boundary. Even against New Zealand, Kohli put on dancing shoes at the dismissal of Henry Nicholls.

As for the match, the ODI was eventually washed out after 13 overs with West Indies reaching 54/1. The second ODI takes place on Sunday. 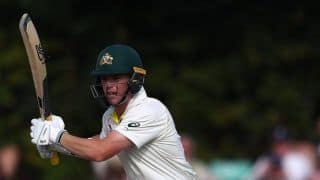