A terrific knock of 90 runs from West Indies Women's captain Stafanie Taylor took the visitors to a comfortable victory in the first Twenty20 International against hosts Indian Women.

A terrific knock of 90 runs from West Indies Women’s captain Stafanie Taylor took the visitors to a comfortable victory in the first Twenty20 International (T20I) against hosts Indian Women. The match was played at the Gokaraju Liala Gangaaraju ACA Cricket Ground, Mulapadu. India Women had a tumbling start but recovered well, putting up a challenging target of 151 but a brilliant display of batting from Stfaanie helped the world champions finish things off on a positive note in the series. FULL CRICKET UPDATES: India Women vs West Indies Women, 1st T20I at Vijaywada

India won the toss and skipper Harmanpreet Kaur elected to bat first. Openers Smriti Mandhana and Vellaswamy Vanitha opened the innings for India. The poor form of Indian openers continued in the T20Is, as both the openers departed without doing much contribution to the team’s score. It was Vanitha who was West Indies’ first catch. The Indian batter was out lbw off a Shakera Selman in the second over of the innings while Smriti soon followed her, scoring 11 runs. India Women were 28 for 2 withing 6 overs and looked to be at backfoot while skipper Harmanpreet and Veda Krishnamurthy emerged as the two saviours. The duo played sensibly, building up the most crucial partnership of India’s innings.

Both the batters initially took their time to settle at the crease but soon paced their innings up. Veda got to her half-century off 45 deliveries but departed the next ball. Harmanpreet played till the end. Her half-century came off 41 deliveries while she finished unbeaten at 68 off 51. A cameo from Jhulan Goswami of 11 runs including a six powered India to a total of 150 post the early scalps.

For West Indies, the bowlers had provided a good start. Shekira who got the team their first breakthrough, was also the most successful bowler of the side with 2 wickets while Deandra Dottin and Chedean Nation both were successful with one wicket each.

West Indies Women gave a strong reply to the hosts with the bat. India got their first breakthrough in the fourth over as Shikha Pandey removed opener Hayley Matthews for 18. No. 3 batter Britney Cooper also followed her soon scoring 16. But it was the skipper Stafanie Taylor who stole the show with a terrific batting. Stafanie played a fearless knock and looked indomitable in front of the Indian bowlers. She took 51 deliveries to score 90 runs, in turn hitting 12 fours and 3 sixes. The Indian bowlers failed to tame the opponents’ skipper and lost the match by 6 wickets as Deandra Dottin finished the innings with a boundary.

India missed their experienced player Mithali Raj definitely, getting an unstable start but it was the bowling which looked ineffective at the home conditions. The team could not pull off what Rajeshwari Gayakwad did in the ODIs, giving away too many runs and losing the match in turn. Shikha Pandey was the most successful bowler for the hosts with 3 wickets while Preeti Bose was the only other successful bowler for the hosts.

With the victory, the visitors go one up in the three-match series after a disappointing 0-3 finish in the ODIs earlier. 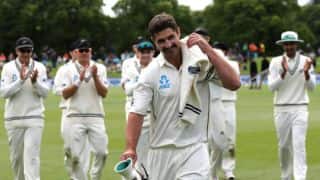