As if the humiliating Test series loss to India was not enough, West Indies off-spinners Marlon Samuels and Shane Shillingford have been reported for suspected illegal bowling actions during the second Test. 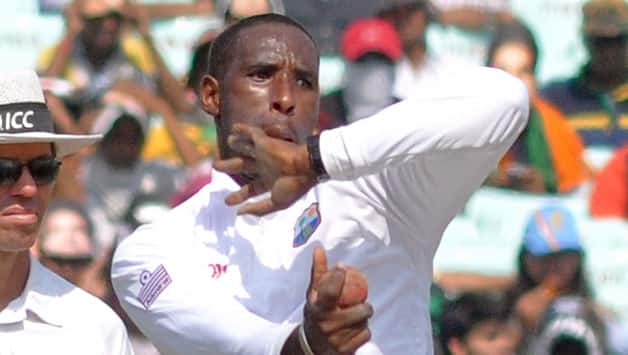 As if the humiliating Test series loss to India was not enough, West Indies off-spinners Marlon Samuels and Shane Shillingford have been reported for suspected illegal bowling actions during the second Test.

“Samuels and Shillingford were reported at the end of the second day’s play on Friday by on-field umpires Richard Kettleborough and Nigel Llong, TV Umpire Vineet Kulkarni and Andy Pycroft of the Emirates Elite Panel of ICC Match Referees,” the International Cricket Council (ICC) said in a statement.

“Mr Pycroft handed over the copies of the reports to the West Indies team manager after the conclusion of the Test.”

The umpires’ reports have cited concerns over the two bowlers’ actions, with particular references to Samuels’ “quicker deliveries” and Shillingford’s “doosras”.

Samuels’ and Shillingford’s bowling actions will now be scrutinised further under the ICC process relating to bowlers reported in Tests, One Day Internationals and T20Is.

“The players are required to submit to an independent analysis of their bowling actions. This analysis must take place within 21 days, and the reports on the independent assessment of their actions must be submitted to the ICC within a further 14 days.

The development comes as a major setback to the team which is already struggling to keep its morale after a shambolic show in the Test series.

“If the players are found to have bowled with an illegal action during the independent analysis then they will be suspended from bowling in international cricket,” the ICC stated.

Until the independent assessments are received, the players will be permitted to continue bowling in international cricket.

“At any time throughout this period the players are subject to being called on the field by the umpire(s) in accordance with Law 24.2 and the consequences of such Law must apply. During this period a further match officials’ report will, however, have no consequence.”

Both the bowlers have previously been reported and suspended from bowling in international cricket after their bowling actions were found to be illegal.

They were, however, allowed to resume bowling in international cricket after they underwent remedial work on their bowling actions and further testing.

Sachin Tendulkar brings nation to standstill, as teary-eyed fans with lump in their throats bid poignant farewell to the iconic son