Patel also said that Sri Lanka will play the ODIs between November 1 and 14.

A livid BCCI may contemplate a freeze on bilateral series with the West Indies for five years and claim hefty damages for the Caribbean team’s unprecedented move to pull out of the remainder of India tour in the wake of an acrimonious unresolved pay dispute with its Board.

The exact course of action and the amount of compensation will come up for discussion at BCCI’s all powerful Working Committee Meeting which has been convened on October 21 in Hyderabad. The aggrieved Caribbean players, who were persuaded to take the field for the fourth ODI in Dharamsala yesterday, conveyed their decision to call off the remaining part of tour to the BCCI, which is now contemplating legal action against the visitors.

Some top Board members are of the view that a stern message should be sent to West Indies Cricket Board (WICB) for abandoning the tour and creating a huge problem for the BCCI. These BCCI officials not only want a ban on future series against the West Indies but also a bar on the participation of the Caribbean players in the IPL. However, that is not a view shared by a majority of the members who feel that the players are not fault and should not be punished.

“We have suffered huge losses due to the decision of the West Indies to pull out of the tour. We are going to claim all the damages and pursue the matter with ICC. We have convened an emergent working committee meeting to discuss the issue as well as the visit, at short notice, by Sri Lanka,” BCCI secretary Sanjay Patel told PTI.

“The working committee members will have dialogue on this and after that we may consider to not pursue further Future Tour Programmes (FTP) with the West Indies.”

Patel said he was busy from morning till midnight yesterday in view of the sudden “unprecedented” move by the West Indies to abandon the tour after playing, with reluctance, the fourth and penultimate ODI in Dharamsala.

“I had a very hectic time and this was an unprecedented decision. We will discuss all these at the working committee. There will be a governing council meeting of IPL preceding the WC meeting,” he added.

Patel had said in a statement yesterday: “The BCCI would like to clarify that despite all its efforts, the Micromax Cup India vs West Indies ODI series has been curtailed because of the ongoing issue between WICB and its players, and the withdrawal of the WI team from the ongoing tour of India.”

The BCCI Secretary had also provided a timeline of the controversy-hit tour from the time the West Indies reached Kochi to play the first ODI till yesterday when the BCCI received a communication from team manger Richie Richardson informing the former that the visitors will not play any more scheduled matches on the tour after yesterday’s ODI.

Patel also said that Sri Lanka will play the ODIs between November 1 and 14 and that England and Wales Cricket Board (ECB) was also willing to send its team. “We had already contacted the Sri Lanka board who had accepted the invitation on short notice. But they have to go back home for their next series against England,” said Patel.

BCCI joint secretary Anurag Thakur is among the more vocal functionaries of the Board in the wake of the pull out. He wants the board to cut all ties with the Caribbean team.

“BCCI tried their level best to convince them but they were adamant not to play due to their internal pay dispute with the board,” Thakur had said.

Thakur sympathised with the West Indies players but said pulling out of the tour was not the right way to show protest over a pay dispute. “They should have behaved more responsibly. The behaviour of players and West Indies board is not right. For the future tour programmes, BCCI should not play with the West Indies. They need to pay for the losses BCCI has incurred from this tour. That way no board or player in the near future should do this kind of practice which goes against the game of cricket,” said Thakur, who is also Himachal cricket boss.

The hurriedly cobbled up series with the Sri Lankan team has however jeopardised their skills training schedule. This was reflected in a tweet by senior cricketer Kumar Sangakkara this morning.

“Our 6 weeks of pure fitness work ends abruptly. Have a week to do a months requirement of skills work before India. Planning ahead anyone,? the former skipper asked in a tweet.

Sri Lankans are currently under an intense fitness programme conducted by the former national rugby union skipper Chandrishan Perera. The programme was tasked at conditioning players for the busy schedule ahead leading up to next year’s World Cup in Australia and New Zealand.

The West Indies players were adamant to withdraw their service since they were un happy with the new contracts, offered to them after landing in India. As per the new contracts, agreed between the WICB and the Players Association (WIPA), the cricketers reportedly suffered a 75 per cent cut in their salaries. 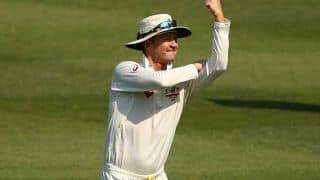 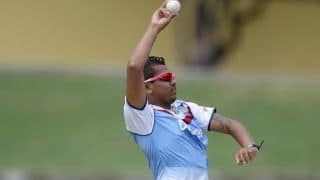