Hosts West Indies will be up against India in the four-Test series which begins with the first Test at the SIr Vivian Richards Stadium in Antigua on July 21.

With India‘s first Test against West Indies to begin soon, the preparations are in full swing for both the teams. While the first Test at the Sir Vivian Richards Stadium in Antigua will lay the foundation for the four-Test series, it will also be India’s newly appointed coach Anil Kumble’s first assignment with Team India. But his counterpart West Indies coach, Phil Simmons will also have a task at hand when his side play at home against a strong Indian side. In an interaction with the media a few days before the series kicks-off Simmons discussed about the significance of the series, Jerome Taylor’s absence and much more. FULL CRICKET SCORECARD: India  vs  West Indies , 1st Test match at Antigua

When asked about how the preparations have gone so far for the West Indies unit, Simmons said, “We have been together since the 11th and things have been good. There have been a few hiccups in the camp, but generally, it’s been good,” as quoted by Cricbuzz.com while pointing out that rain has been the cause behind those hiccups. READ: Sanjay Bangar expects grass on Antigua track for 1st Test against West Indies

While, commenting on Miguel Cummins inclusion in the Test squad, Simmons said, “I don’t know if it strengthens because the experience won’t be there. Miguel was in Australia with us when Shannon Gabriel got injured, so it’s good that he had a little (feel) of what Test cricket is like from the outside and in the squad. Him joining the team is good.” READ: India vs West Indies 2016: Virat Kohli and co meet Viv Richards ahead of 1st Test

West Indies are currently placed at No. 8 in the ICC Test rankings and when speaking about significance of the upcoming series against India, Simmons said, “Every series is significant. I think it’s a case where we want to continue winning. We won the last Test match we played in the Caribbean against England and then we had a couple of matches against Australia where we didn’t do well. So now, we just want to try and build on what we have been trying to do in Australia and the last two Tests there were not as bad. So we’re looking to build on that.” READ: India vs West Indies 2016: Ajinkya Rahane believes patience key to success on slower tracks

Simmons though, felt India were a strong side and was full of praise for their batting order. He said, “Whether they think they are well prepared or not, they are one of the most dangerous sides in the world. Their batting line-up alone tells you that they’re dangerous side and that it’s going to be a hard series. We haven’t played four Tests back-to-back in a long time, so that too is going to make it even harder. But we’re going to try to do our best in every Test match.”

Simmons though, when questioned about West Indies’ concern about not having a regular spinner in the squad, said, “I don’t know if you can say that because Bishoo has been the settled spinner for the last three or four series. He got injured during the England and Australia series. We have only had two spinners in the last three or four series, which is him and (Jomel) Warrican and we just decided to go with him for the team.” 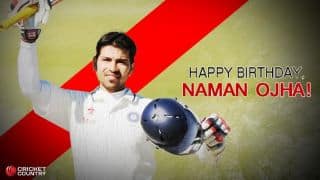