The live cricket streaming of the Day3 of 1st Test between India and West Indies is available on tensports.com, along with OZEE and DittoTV app on your mobile.

Vistors India take on hosts West Indies on Day 3 of the first of the four-match Test series at the Sir Vivian Richards Stadium, in Antigua on Friday, as the live cricket streaming of the match is available on tensports.com, along with OZEE and DittoTV app on your mobile, while the live telecast of the match is available on Ten 3 and Ten 1 HD, along with Hindi commentary on Ten 2. West Indies end Day 2 of the first Test at 31 for 1. Rajendra Chandrika was caught behind of Mohammed Shami during the closing stages of the day. Kraigg Brathwaite and night watchman Devendra Bishoo will resume Day 3 for the hosts. LIVE CRICKET SCORECARD: India vs West Indies 2016, 1st Test at Antigua

India resumed from the overnight score of 302 for 4, with Kohli and Ashwin going strong. Kohli got to his maiden double century just before lunch, but was dismissed in the second ball after the break. After Kohli s dismissal, India did not collapse. Ashwin found a good partner in Wriddhiman Saha and the duo added 71 for the sixth wicket before Saha was stumped. Ashwin eventually got to his century a few moments later, but played a lofted shot and ended by holing out in the deep in a bid to up the ante. However, India s tail was not willing to give up just yet. LIVE CRICKET UPDATES: India vs West Indies 2016, 1st Test at Antigua, Day 3

On Day 1, India had won the toss and elected to bat first. India have gone into the match with five bowlers, which includes a couple of spinners. Not major surprises in the West Indiies XI as well. All-rounder Roston Chase has been given his maiden Test cap in this match. 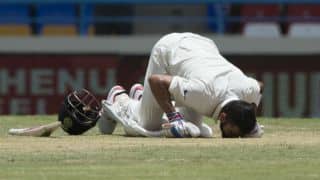