Chris Gayle is set to return in the maroons as West Indies gear up for the one-off T20I against Virat Kohli’s India.

April 3, 2016. Carlos Brathwaite struck his fourth six. Ben Stokes was in tears. West Indies dressing room erupted. A man leading the celebration was a shirtless Chris Gayle. The flavour was ‘Champion, Champion.’ Putting the “Don’t blush, baby” controversy behind, he had starred in another ICC tournament triumph for the once-upon-a-time giants in cricket. That was the last time Gayle featured in the West Indian jersey. It has been 15 months since. At his hometown, Kingston, at his home ground, Sabina Park, Gayle is set to return in the maroons as West Indies gear up for the one-off T20I against Virat Kohli’s India. Full Cricket Scorecard: India vs West Indies, one-off T20I at Sabina Park

With return of the stars, there are reasons to be excited about West Indies, but India carry momentum. The plethora of stars has played together for a while and not too long back they were rocking in the IPL. West Indies, too, whitewashed Afghanistan recently, but India have the edge when it comes to the balance of the sides, especially in the bowling department.

It should be a good contest between India’s batting against the West Indian spinners, and West Indies’ batting against Indian pacers. India will miss Jasprit Bumrah, but they have one of the best T20 bowlers in Bhuvneshwar Kumar, and he is one bowler Gayle has not decoded yet. Add the mystery of Kuldeep Yadav to the equation.

Speaking of mystery spinners, West Indies are armed with Narine and Badree, and that spell may go on to be the decisive factor.

Kohli is up against his RCB mate Gayle. Will he open the batting? That is a question India will have to answer. Barring the hiccups in the last 3 ODIs, Shikhar Dhawan has been in good form since IPL 2017, and Ajinkya Rahane has just won the Player of the Series award in ODIs. Talking of T20 form, Rahane played two very good knocks as an opener for Rising Pune Supergiant (RPS) in the IPL playoff as well as final.

India will not want to disturb the opening combination, which will mean Kohli will be at No. 3. Rishabh Pant, who warmed the benches in the ODIs, is expected to make his way in the starting line-up.

Yuvraj Singh picks himself, but if he has not recovered from his niggle, then Kedar Jadhav may just cling onto his place in the side ahead of Dinesh Karthik as he lends more balance with his off-spin.

The last time India played a T20I, Yuzvendra Chahal got a 6-for. He isn’t in the squad and therefore, there will be a race between Ravindra Jadeja and Ravichandran Ashwin.

While Ashwin has been amongst wickets and bowling well, Jadeja was excellent with his economy rate in the last ODI. This will be a tricky call.

A million dollar question is: will Narine open the batting with Gayle? Probably not. Gayle, barring the 38-ball 77 against Gujarat Lions had flopped miserably in the IPL 2017. West Indies do not have an in-form opener in him. When Evin Lewis played a T20I against India the last time, he slammed a 49-ball century at Florida.

Despite Narine’s fireworks for Kolkata Knight Riders, West Indies will go ahead with Lewis partnering Gayle at the top. Chadwick Walton was opening against Afghanistan. The 32-year-old wicketkeeper-batsman will have to drop down the order to accommodate Gayle.

Local boy Rovman Powell, who was under-bowled in the ODIs, will have to fill in the shoes vacated by Dwayne Bravo and Andre Russell. Meanwhile, addition of Jerome Taylor and Brathwaite lend stability to the bowling attack.

The dark horse for the Caribbean outfit is Kesrick Williams. The pacer was one of the stars in West Indies’ win in the fourth ODI last Sunday. With 14 wickets from 8 T20Is at 11.21, Williams also has an excellent economy rate of 5.7. The 27-year-old plays for Jamaica Tallawahs and therefore will play in familiar conditions in his CPL home ground. He will be the one to be watched out for.

It is expected to be sunny at Kingston with chances of occasional showers. It is the same venue where the sides played the fifth ODI. It was a belter where West Indies missed out and Kohli walloped them. Expect a run-fest.

Suvajit Mustafi consumes cricket for lunch, fiction for dinner and munches numerous other snacks throughout the day. Yes, a jack of several trades, all Suvajit dreamt of was being India’s World Cup winning skipper but ended up being a sports writer, author, screenwriter, director, copywriter, graphic designer, sports marketer, strategist, entrepreneur, philosopher and traveller. Donning so many hats, it’s cricket which gives him the ultimate high and where he finds solace. He can be followed at @RibsGully [Twitter] and rivu7 [Facebook].
First Published on July 9, 2017 9:03 AM IST
Last updated on July 9, 2017 9:03 AM IST
TOPICS:
India India tour of West Indies 2017 India vs West Indies West Indies
SERIES:
India vs West Indies 2017 Match : India vs West Indies 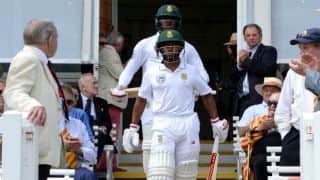