Share great camaraderie with Ravi bhai, will be very happy if he continues as head coach: Virat Kohli

Share great camaraderie with Ravi bhai, will be very happy if he continues as head coach: Virat Kohli

The Kapil Dev-led Cricket Advisory Committee (CAC) is given the task to pick the next India coach and the support staff.

In a press conference ahead of the team s departure for the West Indies series on Monday, Indian skipper Virat Kohli made it clear that he and the team will be happy if Ravi Shastri continues his stint as the team s head coach.

Shastri, along with the members of the support staff, including batting coach Sanjay Bangar, fielding coach R Sridhar and bowling coach Bharat Arun, has been given a 45-day extension following the conclusion of the ICC Cricket World Cup 2019.

The Kapil Dev-led Cricket Advisory Committee (CAC) is given the task to pick the next India coach and the support staff.

“If the CAC wants my advice or opinion (on the appointment of a new coach), I will speak to them, said Kohli.

The CAC has not contacted me on this. But all of us share a great camaraderie with Ravi bhai and will be very happy if he continues (in his role). We have done well under him,” added the Indian skipper.

“But as I had said, it’s on the CAC to decide (how to go about the procedure of appointing the new coach),” concluded Kohli.

While the deadline to file the applications for the roles of head coach and support staff is July 30, the interviews for the same are expected to take place on August 13 or August 14.

Kohli also rubbished the reports of rifts between him and Rohit Sharma, terming those reports a bunch of lies. In my opinion, it s baffling and ridiculous to read such stuff, said Kohli.

Public talks about how well we ve played, and here we re feeding lies and talking about negative things. And I ve seen this being brought up for far too long now. It s bizarre how people are creating these things. You enter the dressing room and witness for yourself the kind of healthy atmosphere that s there. The lies are made to look believable,” added Kohli.

ALSO READ: After reports of rift in India s ODI team, BCCI wants one of the senior players to douse the flames

India are scheduled to play three Twenty20 internationals, three ODIs and two Tests against West Indies and the series will kick off on August 3 with a T20I. 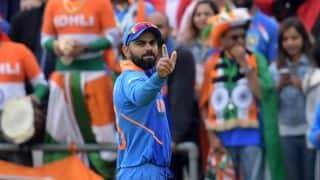