Currently, West Indies are 54 for the loss of two wickets in six overs, with veteran Marlon Samuels on one, and Lendl Simmons on two.

The reigning world T20 champions West Indies star opener Johsnon Charles was dismissed for a healthy 43 by leg spinner Amit Mishra, after being caught by Ajinkya Rahane at long on, in the second and final Twenty20 International (T20I), at the Central Broward Regional Park Stadium in Lauderhill, Florida on Sunday. It was almost a full length ball from Mishra, as it was pulled for a big one by Johsnson, straight down the ground, but with less power, as Rahane came in from long on to complete a diving catch. Currently, West Indies are 54 for the loss of two wickets in six overs, with veteran Marlon Samuels on one, and Lendl Simmons on two. Full Cricket Scorecard: India vs West Indies, 2nd T20I at Lauderhill 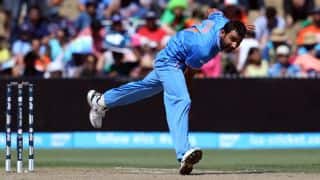