West Indies won the series 1-0 after the second T20I against India was abandoned due to rain.

Following the delay in start of the second T20 International (T20I) between India and West Indies at Lauderdale, the ICC has issued a statement saying that the timings were tweaked after consultation of the two competing teams. After a 40-minute delay, there rain stopped play during India’s innings, which forced the match to be abandoned. As a result of this, West Indies won the series 1-0, courtesy of their one-run win in the first T20I at the same venue. In the second T20I, India were set a target of 144 to win and level the series after just about failing to chase 246 in the first match. Full Cricket Scorecard: India vs West Indies, 2nd T20I at Lauderhill

While Star TV have taken a lot of stick for the “technical failure”, the ICC believes while it was not their call to set the timings, nothing wrong took place that day. “Taking into account the strategic considerations behind the staging of the two international matches in Florida, the match officials, on the request of the two competing Members, agreed to tweak the playing hours to allow the host broadcaster to overcome the technical difficulties,” an ICC spokesperson said on the issue, according to cricbuzz.com. READ: Play called off as rain plays spoilsport; WI clinch series 1-0

Both BCCI and WICB are yet to make a comment in this regard, but the delay ensured that the match does not have a result. A minimum of five bowlers have to be bowled to constitute a T20I match. After West Indies had played out their 20 overs, India managed to play just a couple of overs, before the rain started pouring. The play did not start after that, as a result of which the match was abandoned. 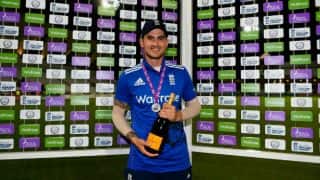 Pakistan vs England: Alex Hales not sure how long his individual record will stand Murali Vijay eager to get back his form after thumb injury