West Indies realise this is the best chance to get to the skin of India as they trail by 246 runs with 9 wickets in hand.

India and West Indies will fight it out on Day Three of the third Test at St. Lucia. The match is swinging from one team to another as Day One belonged to West Indies, for most part, but India fought back hard to share honours. Day Two also ended up on the same note as Ravichandran Ashwin and Wriddhiman Saha scored hundreds but a late fightback by the hosts have made the match interesting. At stumps, West Indies have made 107 for 1, trailing India by 246 runs. The four-Test series is currently in favour of the visiting team with a lead of 1-0 after winning the first Test at Antigua by an innings and 92 runs. Full Cricket Scorecard: India vs West Indies, 3rd Test match

Winning the toss, Jason Holder invited India to bat on a pitch which had something for the seamers. The decision paid off as the Indians got off to a poor start. They lost Shikhar Dhawan and Virat Kohli in quick successions to leave the team in tatters. KL Rahul scored a fifty along with Ajinkya Rahane‘s 35 but it was a well planned out and stitched partnership of 213 runs between Ashwin and Saha that brought India out of troubled waters. They scored centuries with Ashwin bringing up his fourth ton, overall, and second of the series. Saha scored his maiden Test hundred and took India to close to 350, but a late fightback by West Indies’ bowlers saw them all out for 353. ALSO READ: Day 2 Report: Brathwaite’s calm fifty guides West Indies to 107-1

The home team did not waste much time after breaking the partnership of Saha and Ashwin and ran through the Indian tail with ease. The equations turned towards them from thereon as their top-order took them to a respectable total by the stroke of stumps. Kraigg Brathwaite opened the innings with Leon Johnson and they added 53 runs for the first wicket before Johnson was run out due to Rahul’s athleticism. Darren Bravo came in at No. 3 and despite India having a attacking field, played sensibly and carefully to take the team to a position from where they can capitalise.

The Indian seamers tried their luck but could not get vital breakthroughs coming their way in the final session. The pitch had also eased out for batting which led to the hosts’ revival. The match is still hung in the balance but the home team have fought well in this Test so far and not looking like throwing it away so easily. India, for the first time, are being made to work hard for runs as well as wickets. They will like to start afresh and produce more wicket taking deliveries before it gets too late for them.

A crucial day’s play awaits on Day Three. West Indies realise this is the best chance to get to the skin of the opponents as they trail by 246 runs with 9 wickets in hand, but will need to maintain the momentum for long. A test of characters from both sides looks scheduled in this grueling Test match on Day Three. 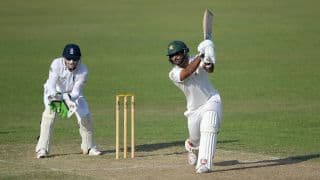