Wankhede's pitch has been favourable heavily towards the batsmen, Virat Kohli and Chris Gayle will be the key players for both the teams as they look to qualify for the final.

Riding high on their recent wins against Bangladesh and Australia, the Indian cricket team will start as favourites for their T20 World Cup 2016 semi-final on Thursday night, against the West Indies. The second semi-final of the ongoing ICC World T20 2016 will be played at the Wankhede Stadium in Mumbai, and the India versus West Indies game can be expected to be a run fest. Since the pitch has been favourable heavily towards the batsmen, India s Virat Kohli and West Indian Chris Gayle will be the key players for both the teams as they look to qualify for the final of the tournament. FULL SCORECARD: India vs West Indies, 2nd Semi-Final match at Mumbai

The winner of the India versus West Indies match will play either of New Zealand and England, who will clash in the first semi-final of the T20 World Cup 2016. While New Zealad and England will play their semi-final at New Delhi, India and West Indies will have their game in Mumbai. The final of the tournament will be held on April 3, 2016, at the iconic Eden Gardens in Kolkata.

India will start as favourites, as their last two emphatic wins have not only brought their campaign back on track in the T20 World Cup, but have also propelled them back as the red hot favourites. The only team that has been unbeaten so far in this tournament is New Zealand, and they will face a stern test to keep their record intact against England.

Nevertheless, all eyes will once again be on Kohli, who has played two terrific knocks to guide India to the semi-final. If Kohli was fabulous against Pakistan, in India s last match in Group 2 against Australia he played an innings of a lifetime. Kohli rated his unbeaten 51-ball 82 as his career-best, and rightly so, because not many gave India the chance to make it to the final four after being pushed totally on the backfoot.

India have their own fair share of worries. The form of their openers Rohit Sharma and Shikhar Dhawan is a massive concern, and Yuvraj Singh may not play in this game. India have kept the cards close to their chests as far as Yuvraj is concerned, as any news of him missing out on the clash will only result in media and public adding more pressure on the Indian cricket team. READ: T20 World Cup 2016: Virat Kohli races to No.1 spot in ICC T20 rankings

The possible replacements in Ajinkya Rahane and Manish Pandey trained at the Cricket Club of India (CCI) ground in Mumbai on Wednesday, signalling that Yuvraj missing out on this all-important match might come true. While India will hope that Yuvraj turns fit before the game, India will have to keep their options open as well as back-up plans in place in case the unwanted happens. Time and again, the venerable Yuvraj has provided India the strength and solidity that they have needed when the top order has been blown away, and in case he misses the second semi-final versus the West Indies, India will need either of Rahane or Pandey to step into the big shoes.

India s bowling has been terrific, and the West Indies inconsistency is what they will aim to exploit. The West Indies have faltered not once but twice while chasing modest scores, and this is one area in which the Indians can actually exert tremendous pressure on Darren Sammy and company.

West Indies depend heavily on Gayle, and he is in form for having struck a 47-ball century against England at the Wankhede. The West Indian win in that game over England means the Caribbean team will be knowing the pitch and the ground a little better than the Indians, who will be forced to depend on their past knowledge and experience.

India had a forgettable game the last time they played at the Wankhede. South Africa had smashed 438 in the final ODI of their tour last year, and Indians had failed miserably in their chase. India will have to be wary of the West Indian firepower, as they would not want t chase any massive total given the fact that there are far too many power-hitters in the Caribbean side. 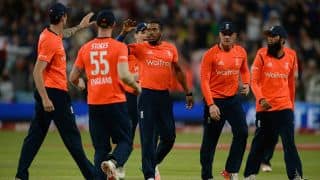