Zimbabwe put up a performance much better than what they did in the previous games.

Zimbabwe finally showed some prowess and control with the bat for the first time in the series when they finished on a score of 145 for the loss of 7 wickets at the end of their quota of 20 overs in the second Twenty20 International (T20I) against India at Harare. Chamu Chibhabha top-scored for the hosts with a 51-ball 67, while Malcolm Waller and Graeme Cremer were unbeaten on scores of 6 and nil respectively. Bhuvneshwar Kumar had the best figures among the Indian bowlers, taking two wickets for 26 runs from four overs. India have to score at a rate of a little over seven runs per over if they are to maintain their unbeaten record in the tour so far. LIVE SCORECARD: India vs Zimbabwe, 2nd T20I at Harare

Hamilton Masakadza was dismissed for a score of 19 off 17 balls, with Zimbabwe losing their first wicket with 28 on board in the fourth over. The hosts were scoring at a fast pace though, reaching a score of 45 for one at the end of five overs. Sikandar Raza’s poor run with the bat continued when he departed for 8 off 7 balls, getting caught by Sanju Samson at third man off the bowling of Sandeep Sharma, who took his maiden wicket in the process. LIVE UPDATES: India vs Zimbabwe, 2nd T20I at Harare

The hosts were progressing well at a score of 112 for three after 15 overs, with a score above the 150-run mark appearing to be very much a possibility for them. The quick fall of wickets in the death overs however, meant that Zimbabwe had to be content with a score of 145 on the board. Bhuvneshwar Kumar was especially effective in the death overs, dismissing both Chibhabha as well as Craig Ervine with a couple of lethal yorkers.

Zimbabwe won the toss for the first time in the T20I and One-Day International (ODI) series, with Sikandar Raza stepping in as the captain in place of the injured Elton Chigumbura. Sean Williams passed his fitness Test and was drafted into the squad along with Malcolm Waller, who replaced the injured Neville Madziva. India opted to rest veteran spinner Harbhajan Singh, and gave Sanju Samson his first international appearance in the process. ALSO READ: Sanju Samson makes international debut 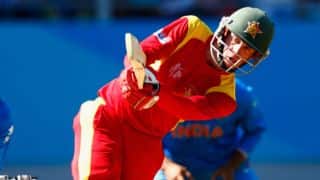 Brett Lee and other cricket experts imitate The Beatles