Zimbabwe lost their third wicket with 85 runs on board when Sean Williams was caught and bowled off the bowling of Akshar Patel during the second and final Twenty20 International (T20I) at the Harare Sports Club in Harare on Sunday. Williams, who passed the fitness test earlier in the day and replaced the injured Elton Chigumbura, was dismissed for a score of 17 off 18 balls, including one four. The wicket brought an end to the 37-run partnership between Williams and opening batsman Chamu Chibhabha, who was batting on 32 at the time of the dismissal. Earlier, Hamilton Masakadza and stand-in skipper Sikandar Raza were dismissed for scores of 19 and 17 respectively, with Zimbabwe scoring at a rate of over seven runs per over. LIVE SCORECARD: India vs Zimbabwe, 2nd T20I at Harare

India earlier lost the toss for the first time in their tour of Zimbabwe, with the latter electing to bat. While there were two changes in the Zimbabwe lineup, viz. Williams and Malcolm Waller in place of regular skipper Elton Chigumbura and Neville Madziva, both of whom were injured. India decided to rest Harbhajan Singh and give Sanju Samson his first international appearance. LIVE UPDATES: India vs Zimbabwe, 2nd T20I at Harare

In the first T20I, India finished on a strong score of 178 for five after their quota of 20 overs, with Uthappa top-scoring for India by scoring 39. Zimbabwe, on the other hand, were off to a decent start with a 55-run opening stand. They however collapsed once the Indian spin duo of Harbhajan (2 for 29) and Akshar Patel (3 for 17) were introduced into the attack. 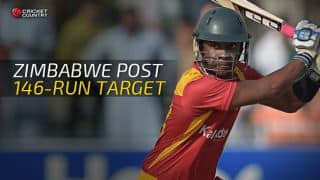