Undefeated India Women are set to take on Zimbabwe Women as they play their final group stage match of ICC Women’s World Cup Qualifier 2017 on Monday.

Undefeated India Women are set to take on Zimbabwe Women as they play their final group stage match of ICC Women’s World Cup Qualifier 2017 on Monday. Scheduled to be played at the P Sara Oval, Colombo, Indian Eves are the hands down favourites of the game. While they have won all three of their games comfortably, bagging 6 points, Zimbabwe have already managed one victory in the tournament so far, virtually ruling out their chances to qualify for the play-offs. This will be a chance for them to end things on a positive note while India will leave no stone unturned to enter the play-offs with yet another victory.  Shaila Sharmin bowls with both arms against Pakistan in ICC WWC Qualifier 2017

India’s performance has been outstanding so far in the tournament. Despite not having their most experienced bowler Jhulan Goswami in the side, they have bowled exceptionally well. Young players like Mansi Joshi, Soni Yadav have stepped up to take responsibility of the pace attack. India’s spin attack has been at its usual best, getting wickets consistently. India’s top-order has also shone despite the absence of regular opener Smriti Mandhana. Deepti Sharma needs special mention for her consistent run. India’s fielding, which looked the only department that required attention, improved with every passing game. After three back-to-back victories, it will be hard for any opponent to match up to their confidence level.

Zimbabwe’s only victory came against Thailand, whom India trounced a couple of games back. All-rounder Loren Tshuma can be their key to success. The middle-order has been consistent with the bat and for Zimbabwe to win the game, players like Mary-Anne Musonda, Sharne Mayers, Precious Marange will have to perform. Nomatter Mutasa will lead the pace attack and will be expected to pick up some early wickets. India vs Bangladesh: Rampant hosts 7 wickets away from win 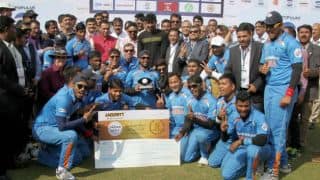