India vs Zimbabwe, Pakistan vs Sri Lanka, ICC U-19 World Cup 2018: Watch IND vs ZIM and other matches Live Streaming on Hotstar

India vs Zimbabwe, Pakistan vs Sri Lanka, ICC U-19 World Cup 2018: Watch IND vs ZIM and other matches Live

The live streaming of the India-Zimbabwe, Sri Lanka-Pakistan and Australia-PNG in the ICC U-19 World Cup will be on Hotstar.

The Prithvi Shaw-led India have been the most impressive unit in the Under-19 World Cup 2018 so far, having won both their Group B games against Australia and Papua New Guinea (PNG). They will now face Zimbabwe in their final game, at Mount Maunganui, before their march to the quarter-final. For Zimbabwe it is a matter of survival in the tournament. Even if they beat India they will have to hope for Australia losing to PNG, and then end on a superior net run-rate. Therefore, it is safe to say the chances look bleak. 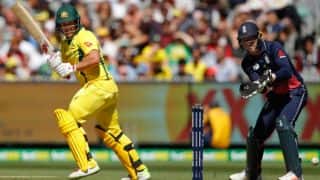