Holder feels India missed having a seventh batsman in their side, while mentioning that the moment MS Dhoni was dismissed, he believed his team had a chance.

West Indies captain Jason Holder feels India missed having a seventh batsman in their side, while mentioning that the moment MS Dhoni was dismissed, he believed his team had a chance to run through India s lower order. India went ahead with three seamers for the third ODI in Pune with left-arm pacer Khaleel Ahmed replacing allrounder Ravindra Jadeja in the team. India, chasing West Indies’ 283 for 9, were bowled out for 240 as no batsman barring captain Virat Kohli left any kind of impact. Kohli recorded his 38th ODI century with the next best being Shikhar Dhawan s 35.

Holder credited the team for their all-round effort. Put into bat, Shai Hope once again led the West Indies batting with a gutsy 95 as the team piled up a total of 283 for nine. “They were probably a batsman short. We knew if we remove Dhoni, we could get in to their lower order and put pressure on them,” Holder said during the post-match presentation ceremony. “Credit to the boys. We hung in the game for as long as possible. We did really well to get to the 280-run mark. It was important for me to stay out there but that didn’t happen. I should have batted deeper. Something to learn there.”

Holder was nothing but praise for allrounder Ashley Nurse. Batting first West Indies were reduced to 227 for 8 in the 44th overs, and from a scenario where even 250 looked tough, the lower-order pair of Ashley Nurse and Kemar Roach revived the innings with a partnership of 56 runs for the ninth wicket. Nurse scored 40 off 22 balls with four boundaries and was helped by Roach s 15 off 19. With the ball, Nurse picked up two wickets including that of Dhawan and Rishabh Pant.

“(Nurse) He is a competitor. I know what to expect from him. He keeps it tight and gives us wickets at regular intervals,” Holder said. “The guys are learning better. We still need to touch up on few things and need to be consistent. We need to buck up a lot more and pay a lot more attention to it. If you want to beat the best teams, you have to be consistent in all aspects of the game, all the three departments.”

India kept losing wickets during their chase but as long as they had Kohli batting, hopes remained. But with India still 64 runs away, West Indies scalped the big wicket of the Indian captain. And who was the man dealing the blow? The experienced Marlon Samuels. Despite enduring his third low score of the series, Samuels said he was glad to be getting the opportunity to bowl again, while praising the current young and fearless West Indies unit.

“I have not been bowling in the nets much as I am coming back from a knee injury. We are playing as a unit and we are getting stronger and stronger,” Samuels said. “For me to sit in the dressing room and watch Shai Hope bat in the way he’s been batting, we have been having a lot of discussion on how to bat on the Indian tracks, is wonderful. He is definitely one for the future. He’s (Hetmyer) fearless. He is brave, he has to get consistent.

“Very important going into the next game 1-1, we wouldn’t want to go 2-0. We will take the next game even more seriously and as long as we are good in all three departments we will be good. We are looking to win and not only compete.” 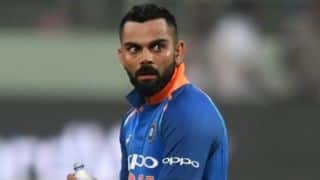 Gave away too many runs in the last 10 overs: Virat Kohli 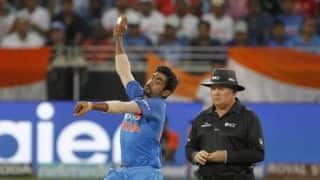