India Women, guided by skipper Mithali Raj and night-watchwoman Shikha Pandey, registered a victory in the one-off Test against England Women, after returning to the longest format after eight years. India Women won by six wickets, as Shikha Pandey hit the winning runs. This is India Women’s second Test win in England. The last time the visitors won was in 2006, which was incidentally the last Test they played till this one.

The third and fourth day of the only Test have supported the batswoman, and India were well ahead on third day, after a good opening partnership by Thirush Kamini and Smriti Mandhana, who scored a half-century. Kate Cross, who looked dangerous on Day Three, could not manage to do much on Day Four.

Even as England Women took the new ball, India played well. There were a few missed chances, though, as Mithali Raj was dropped by Sarah Taylor. There were a few LBW appeals also. Shikha Pandey, who is just six Twenty20 Internationals (T20Is) into her career, held her calm and supported the skipper to victory. Charlotte Edwards dropped Mithali also at mid-off at one point.

Earlier on Day Two, Kate Cross’s three wickets gave England Women an upper-hand against India Women after the visiting team’s openers Smriti Mandhana and Thirush Kamini put on a good show on Day Three of the one-off Test on Friday at Wormsley. India were on 119 for four and require 62 runs with six wickets and one day remaining against England Women. However, with Shubhlakshmi Sharma having dislocated her shoulder, India are ideally left with five wickets.

Kate gave the first break when she removed Thirush and few overs later, she removed Smriti, who scored 51 on Test debut. The 17-year-old played plenty of elegant and easy shots. The match also show a record of 20 LBWs till now. Mithali and Poonam Raut were going  good and just when it seem that India will go to stumps with the two unbeaten, Heather Knight removed Poonam, as she picked her first Test wicket. Very soon Harmanpreet Kaur was dismissed by Kate Cross, as Sarah Taylor took the catch.

Earlier, Jenny Gunn and Anya Shrubsole‘s partnership of 58 runs guided England Women to 181 for the loss of seven wickets at lunch. Jhulan Goswami was the pick of the bowlers for India, as she registered a four-wicket haul. After losing Sarah Taylor to Shubhlakshmi Sharma early on Day Three, England rode on Jenny and Anya’s partnership. Shubhlakshmi later on hurt her wrist, as she tried to stop a hit from Anya from running to the boundary. She was attended to by Indian officials. Jenny has her highest Test score now. Wicketkeeper-batswoman Sarah Taylor scored 40. She was looking strong and hit a couple of fours, but a few balls later she was bowled by Shubhlakshmi.

On Friday, Indian batswoman Harmanpreet Kaur escaped fine but was reprimanded for showing dissent at the umpire’s decision on the first day of the first against England women cricket team on Tuesday. Harmanpreet pleaded guilty to the Level 1 breach of the ICC Code of Conduct and accepted the sanction proposed by ICC Match Referee David Jukes. The charge was brought by on-field umpires Billy Taylor and David Millns.

“Kaur was found to have breached Article 2.1.3 of the ICC Code of Conduct for Players and Player Support Personnel, which relates to showing dissent at an umpire’s decision during an International match. As such, there was no need for a formal hearing.” All Level 1 breaches carry a minimum penalty of an official reprimand and a maximum penalty of 50 per cent of a player’s match fee,” the ICC was quoted as saying.

Player of the match – Jenny Gunn 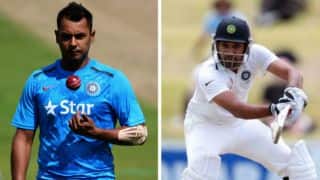 India vs England 5th Test at The Oval: India made the right call by selecting Stuart Binny ahead of Rohit Sharma 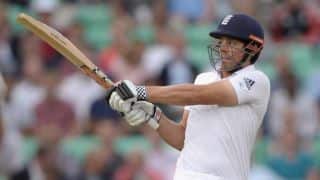