Bengaluru: Buoyed by their 3-2 series win in the One-Day International (ODI) series against New Zealand Women, the Indian Women will start favourites in the three-match Twenty20 Internationals between the two teams, commencing on Saturday.

As well as India played to turn a 1-2 deficit into a 3-2 win, the hosts, led ably by Mithali Raj, showcased their collective character and ability to bring up two back-to-back wins against the ‘White Ferns’, captained by veteran Suzie Bates.

More importantly, India’s batting that initially appeared extremely vulnerable in the ODI series, came good at vital moments while the fielding too showed appreciable improvement, something that Raj spoke about at the presentation ceremony on Wednesday.

Thus, India would again be looking to their top order to fire on all cylinders in the T20I series while the Kiwis face an uphill task after losing the series when looking good enough to win it.

The onus will be on Bates to get her players to regroup and perform to potential, though the task is easier said than done, considering the high confidence with which India will be going into the T20 bash. All the three matches will be played at the Mangalam Chinnaswamy Stadium with the second and third games scheduled for July 13 and 15. 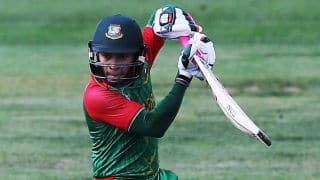