Catch live score and updates of the third and final ODI here.

Disappointing day so far as the Indian Women were deprived of their opportunity to pull off a win in the third and final ODI. Charlotte Edwards has been declared the Player of the Series in the presentation ceremony held at the Long Room at Lords.

The third One-Day International between England Women and India Women has been called off due to incessant rain. England Women win the three-match series 2-0 as a result.

#EngWomen’s third Royal London ODI at Lord’s has also been abandoned due to the rain pic.twitter.com/clxEAJsFTz

The continuous showers at the ground have caused the England players to retreat to the Long Room for a team photo.

The rain @HomeOfCricket has forced the #EngWomen team photo into the Long Room. Smile girls! pic.twitter.com/kmcec1TLUb

Play yet to start as the downpour is yet to cease and the ground is expected to remain wet for quite sometime now even if the heavens are to open up.

UPDATE: The start of the match has been delayed due to rain in London. Stay tuned for more information.

Hello and welcome to CricketCountry’s live blog of the third and final One-Day International between India women and England women at Lord’s. I am Sudatta Mukherjee and I will be bringing the live updates of the match.  India will be playing for pride as they have already lost the series.

After the memorable win in Tests, India have not quite fired in the limited overs. Though England have been a formidable side, Indian women have failed to seize the momentum at the right moments unlike the Tests. They surrendered meekly in the first ODI and the bowlers did well in the second match. Needing 215 to win, the batting fell short again.

The series is part of the ICC World Championships with England taking on India and in another series, Australia are playing Pakistan. This will be followed by West Indies against New Zealand. 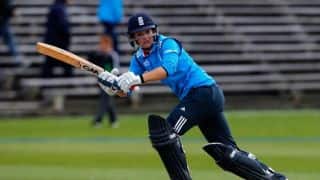