India Women vs South Africa Women 2014: Proteas set a target of 187 for Indians

India Women vs South Africa Women 2014: Proteas set a target of 187 for Indians

Among the Indian bowlers, Shikha Pandey and Ekta Bisht claimed three wickets each.

South Africa Women set a target of 187 runs to win for India Women during the 2nd ODI of the ICC Women’s Championship at M Chinnaswamy Stadium in Bangalore. Chloe Tryon was the highest scorer in the innings with a score of 49.

earlier during the day, India Women skipper, Mithali Raj won the toss and elected to field first. Batting first, South Africa Women lost the early wicket of Trisha Chetty at the score of 27, followed by Lizelle Lee at the score of 40, with both departing for cheap 21 and 16, respectively. Nadine Moodley too followed immediately at the score of 45 with Marizanne Kapp being dismissed for just nine at the score of 63.

There was a good stand between Mignon du Preez and Dane van Niekark of 54-runs. However, following their departure, there was hardly any partnership as they finished on 186 for the loss of eight thus managing to bat through the 50 overs.

Among the Indian bowlers, Shikha Pandey and Ekta Bisht claimed three wickets each for 19 and 28 respectively to put pressure on the Proteas Women batters. 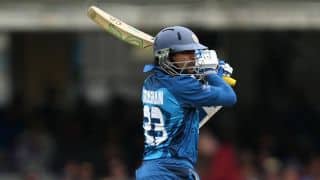