The live streaming of third ODI can be watched on Cricket South Africa Youtube page.

India Women head to the third and final ODI winning the series by 2-0. The match will be held at Senwes Park at Potchefstroom. All that India Women would be hoping for is their maiden bilateral whitewash over South Africa. The streaming of the match, finally, is available on Cricket South Africa Youtube page. After a six-month lay-off since the 2017 Women s World Cup, the Indian Eves were off the mark instantly by winning the first two ODIs convincingly.

In the first two matches, Smriti Mandhana single-handedly batted out the South Africans. However, Punam Raut has been unable to convert her starts into big scores. The middle-order, too, has chipped in. Meanwhile, the bowling department has troubled South Africa with both pace and spin. On the other hand, South Africa would hope for a turnaround in fortunes in terms of their batting as well as bowling. 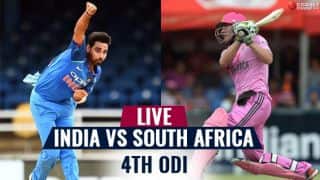