Mithali Raj and her team did not get to play any international games since 2017 Women's World Cup.

Kimberley: Seven months gone after their stupendous show in the World Cup, Indian women‘s cricket team is ready to shake off their rustiness as they take on South Africa in a three-match ODI series, which is a first round fixture of the ICC Women’s Championship. The three-match ODI series starting on Monday will give both teams a chance to directly qualify for the 2021 ICC Women’s World Cup. Kimberley will be the venue of the ODIs on February 5 and 7, while the series will finish in Potchefstroom on February 10.

Mithali Raj and her team did not get to play any international games, thanks to lackadaisical planning on the part of the BCCI and the biggest challenge will be to get back into the groove. With women’s cricket being closely followed post World Cup, Mithali knows that their responsibility has increased manifold.”Every match will be scrutinised by people, by the critics, by everybody, because now people have seen the actual standard of women’s cricket and the Indian team,” Mithali said.

“So, yes, from now on whatever matches that we get to play, will be closely watched by all of them (and) followed by all the cricket fanatic people in our country as well as around the world,” she added. The skipper herself has been busy with a series of promotional events and only played a few matches in the National One-Day Championship for women.”I am eager to get back to playing international cricket. It has been a while since the World Cup and the South Africa tour will be the first once since. It is good to play against good sides in challenging conditions because it gets the best out of a side which is trying to improve,” she said.

The centre of attention will be 17-year-old Mumbai schoolgirl Jemimah Rodriguez, who has been a prolific scorer in domestic competitions. While India finished a creditable runners-up in the World Cup, they were comfortably crushed by 115 runs by the Proteas women in the league stage.

“I cannot believe it’s already been six months, feels like yesterday,” remarked South Africa’s 24-year-old captain Dane van Niekerk, adding: “It’s honestly still very raw for me personally, I think it’ll be for a while. I’m sure for most of our players it’s the same.” Van Niekerk, who is the ninth-ranked bowler in the world, further said: “It is a fresh start for us as a very tight unit. We don’t want to go through the qualifiers again and that means we need to hit the ground running from game one.”

Mithali concurred with her opposite number.”It is important to get points under our belt, so the three ODIs are going to be very important because it is a fresh start to the ICC Women’s Championship. We definitely are looking forward to being in the top four, so that we get a direct entry; that’s our aim. But to get there I think it is important that we get as many points as we can. For us, the build-up and preparations for the ICC Women’s World Cup 2021 starts in South Africa. The more ODIs we will play in these two-three years, the more they will give a sense of how the players and the team are shaping.”

One area where Mithali wants her team to improve is bowlers upping the ante while batting.”I think the first thing is definitely that the bowlers need to bat. That is something I would consider very important. I would want all my bowlers to contribute (with the bat) in the lower-order.” 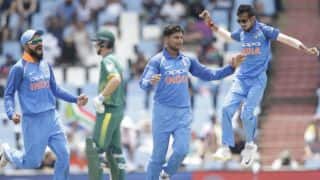 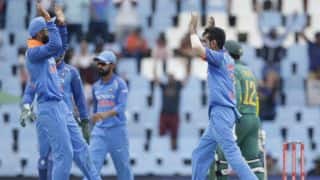