A superb all-round show from India women saw them outclass Sri Lanka by nine wickets in the series opener at the Galle International Stadium on Tuesday.

A superb all-round show from India women saw them outclass Sri Lanka by nine wickets in the series opener at the Galle International Stadium on Tuesday. Chasing 99, India overhauled the target in 19.5 overs with opener Smriti Mandhana scoring an unbeaten 73.

Batting first proved to be a disastrous decision by Sri Lanka captain Chamari Athapaththu who was ended as their top-scorer. After crawling to 8/0 in five overs, pacer Mansi Joshi gave India their first breakthrough with the scalp of opener Prasadani Weerakkody for 2.

Veteran pacer Jhulan Goswami, who recently announced retirement from T20Is, then got rid of Nipuni Hansika (2). Soon the hosts were left tottering thanks to a double-wicket over from Poonam Yadav as she dismissed Anushka Sanjeewani (4) and Nilakshi de Silva (1) in the space of four deliveries.

Athapaththu meanwhile was waging a lone battle and for a brief period, found some support from No. 8 Sripali Weerakkody. Together they added 29 runs for the eighth wicket but Deepti Sharma separated them when she had Athapaththu hole out to Goswami on 33.

Sripali Weerakkody was the last wicket to fall after scoring 26 as Sri Lanka were bowled out for 98 in 35.1 overs. Mansi Joshi was the pick of Indian bowlers, taking 3/16 while Jhulan and Poonam picked up two wickets each.

The target proved to be a walk in the park as the opening pair of Punam Raut and Mandhana added 96 runs between them. Raut departed after scoring 24 and Mandhana then sealed the win with a four to long-off.

The second ODI of the three-match series will be played on September 13 at the same venue. 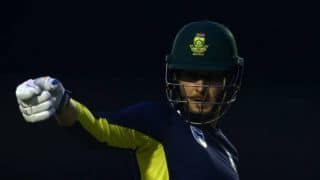