India Women vs Sri Lanka Women 2018 1st ODI live streaming: Teams, Time in IST and where to watch Online i
By CricketCountry Staff

India women are touring Sri Lanka to play in a series of three ODIs from Tuesday. The ODIs are part of ICC Women s Championship,

India, Sri Lanka, West Indies and South Africa are at the bottom half of the points tally and will aim to gain on the top-half that includes New Zealand, Australia, England, and Pakistan. West Indies will be hosting South Africa for a similar series [September 16-22] which also offers the four teams a chance to fine tune their preparations for the ICC Women’s World T20 in November.

India are currently placed sixth in the table with four points from six matches, Sri Lanka are yet to open their account. The two teams will play in three ODIs from September 11-16.

Both the teams are confident of their chances.

“Our aim is to do well in this series, in order to build our points to automatically qualify for the ICC Women s World Cup, so winning the three games is our first priority,” Sri Lanka captain Chamari Athapaththu was quoted as saying in an ICC media release on Monday.

She further added, “We are shaping up very well. We have a new coach, Harsha de Silva, who has brought in some fresh thinking into our game. He has been with us earlier and the Sri Lanka women s team have won matches under his charge. So, the confidence level of our players has gone up.

India captain Mithali Raj said, “We will definitely play to our calibre and potential to help us gain maximum points from our series against Sri Lanka. We look forward to climb up the table and will work together as a team.”

“We have practiced well for this series and this series will give us a great opportunity to prepare for the upcoming ICC Women s World T20 in the West Indies.

“The Sri Lanka side is good and capable of beating any leading team. We will definitely not take this series lightly, especially because winning every point is important in getting our direct entry into the ICC Women’s World Cup.”

Below are the full details of where you can watch and follow the live streaming of the India Women vs Sri Lanka Women 2018, 1st ODI. 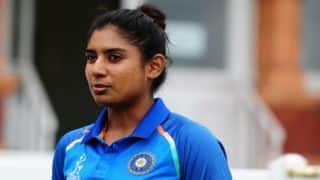 India vs England 2018, 5th Test, Day 5, LIVE Streaming: Teams, Time in IST and where to watch on TV and Online in India