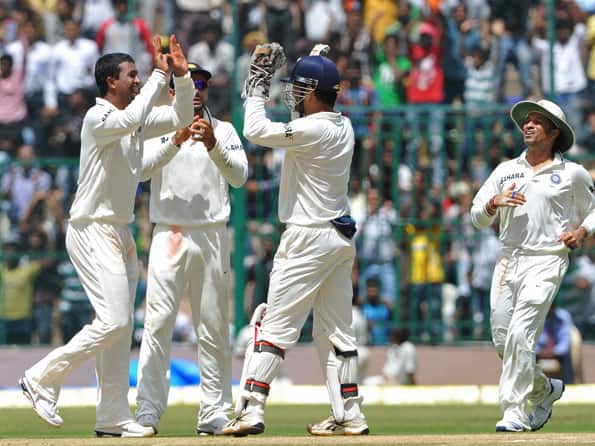 Yadav claimed the wickets of openers Brendon McCullum (23) and Martin Guptill (7) while spinners Ravichandran Ashwin and Pragyan Ojha took the wickets of Kane Williamson (13) and captain Ross Taylor (35) respectively as New Zealand reached 123 for four at the tea break on the third day.

Daniel Flynn and James Franklin were batting on 25 and 11 respectively. The visitors have taken a 135-run lead with six second innings wickets in hand.

Yadav gave the much needed breakthrough to India when he removed both openers soon after the lunch break. Ojha and Ashwin continued the good work by picking up one wicket each.

Resuming at the lunch score of 29 for no loss, New Zealand lost both their openers quickly. Yadav gave the vital breakthrough for India by pitching the ball up instead of hitting the deck which hardly helped him take wickets consistently in the series so far.

The Indian pacer bowled a low full toss at Martin Guptill (7) who got an inside edge before hitting his leg stump.

Soon a rejoicing moment came his way when he punched Yadav at covers for a couple of runs and became the 12th New Zealand player to achieve the feat of reaching 3,000 Test runs.

Taylor and Williamson batted cautiously against Zaheer Khan, Yadav and Ojha but hit poor deliveries to the fence. The duo put on a 38-run stand before Ashwin struck in his very first over, removing Williamson caught at first slip by Virender Sehwag off a top spinner which took the edge of the bat.

Next batsman Daniel Flynn and Taylor kept the momentum going by getting odd boundaries. Soon they took the New Zealand total past 100 runs after Flynn cracked Ashwin to deep backward point fence.

Taylor could not carry the good work any further and succumbed as he missed a sweep shot off Ojha to be adjudged out LBW.

The Indian first innings folded after their batsmen failed to negotiate an inspiring spell from Southee who used the second new ball and existing pitch conditions to his advantage picking up four wickets out of the remaining five with extraordinary figures of 7 for 64.

The overnight Indian pair of Kohli and Dhoni resumed the innings with couple of hits to the fence. But they succumbed to some magnificent bowling by Southee.

The Indian batsmen, especially Kohli and Dhoni, spurned an opportunity to consolidate on the overnight score of 283 for five. Once the top-half was gone, the Indian tail too did not wag much.

R Ashwin (32 not out) was an exception though, scoring runs in boundaries before he fell short of partners at the other end. (PTI)