While Dhoni was rated the best ODI and home-Test captain by significant margins, Ganguly was the clear winner in the away-Test captaincy category.

Widely hailed as two of the greatest leaders in the history of Indian cricket – Sourav Ganguly and MS Dhoni ruled the hearts of every cricket lover in the past two decades. Both Ganguly and Dhoni scripted numerous memorable triumphs for the country which further enhanced the reputation of the Indian cricket team in the world. However, who is the better captain among the two and who made a bigger

While there is no questioning the greatness of the two leaders who transformed Indian cricket in their own ways but picking one out of the two is an equally challenging task. Ganguly or Dhoni? That’s the question a few former international cricketers tried to answer in a recent television debate.

In the final result, Dhoni edged out Ganguly as India’s greatest captain by a very small margin.

Dhoni’s performance with the bat while captain proved to be the difference. In each category an average score was calculated from each panel members’ votes. After the results of each were totalled together, Dhoni was ahead by less than half a point, according to a press release from the broadcaster.

Ganguly scored higher than Dhoni in four categories — captaincy away from home, transformational effects of captaincy on the team, the success of team handed over to the next captain, and overall impact.

Dhoni scored more points in the four categories of captaincy at home, ODI captaincy, titles won and performance as batsman while captaining the team. The difference in points between the two greats came down to decimals.

Dhoni helped India win the 2011 50-over World Cup and 2007 T20 World Cup and also the ICC Champions Trophy in 2013, becoming the only captain to win all three ICC trophies. Under Ganguly, the Indian team beat a team like Australia on the road and developed into a fearless unit with the likes of Virender Sehwag, Yuvraj Singh, Harbhajan Singh, Zaheer Khan and Ashish Nehra making a name for themselves.

“The biggest difference between Dada’s captaincy and MS’s captaincy is MS, the player for me. I think in that middle order, the ability to close games, win games, finish games in that calm that he brought to the people around him. I think for me, that is probably the biggest difference between the two heroes, is MS Dhoni,” former South Africa captain Graeme Smith said.

“If Dada had an MS type player, his team was slightly more developed, I think you would have seen him win plenty more trophies. Dada was blessed to play or not blessed to play in an era where Australian cricket was at the forefront and dominating the world game as well which at the time the team had won the most during that period,” he added.

“You can be judged on a lot of things but sometimes you have to leave something behind and I think in that sense, Dada did a lot to create a wonderful legacy for others to inherit and MS benefitted from that,” added former Sri Lanka captain Sangakkara.

“You are talking about two iconic figures and outstanding cricketers. It’s such small margins and it’s very difficult to debate, but I think, like Allan Border probably did in the early days of Australian cricket, setting them up for the success, I think that you have got to look at Dada here and say that what he did for Indian cricket was iconic,” opined Smith.

“MS, exceptional player, unbelievable captain, again, has moved Indian cricket forward. But the foundation for all of that was laid by Dada for me,” echoed Sangakkara.

Smith and Sangakkara picked Ganguly over Dhoni when it comes to Test cricket but both agreed that Dhoni is the man in white-ball formats.

“From my perspective, it’s always difficult to move away from an opening batsman and a captain as challenging. I agree that when it comes to Test cricket, having played against MS, you would always felt that you had an opportunity to work him over, specially away and out of India, but I think when it comes to Test cricket, I’ll have to sit with Dada, but one-day cricket, certainly MS is my man,” said Smith. 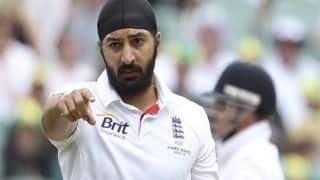 Black Community Has to Endure Much More Racism in UK: Monty Panesar