Here is a list of five things about Patrick Farhart.

When news broke out that Patrick Farhart has replaced Nitin Patel as Indian cricket team’s physiotherapist, Patrick Farhart suddenly started trending on the internet, especially social media. Fans of Indian cricket were obviously curious to find out about the man. Patel had been around since India’s successful tour of England in 2007 and had been an integral part of the Board of Control for Cricket in India (BCCI); he had been conducting their physiotherapy training courses. He resigned from his post in May 2015 citing personal reasons. It seems Farhart has extremely big boots to fill, but it should not deter him, for he has an impressive CV as well. Also read: Indian cricket team to have 3 new support staff members

Here, then, is a list of five things about Patrick Farhart:

The Lebanon connect: Have you been wondering about Farhart’s surname, and about why Microsoft Word underlines the word in red whenever you type it? The reason is simple: Patrick Farhart is of Lebanese origin. NCA, KSCA President’s XI register wins in All India cricket tournament

Curriculum vitae (experience): India is certainly not Farhart’s first assignment. Having started his career with Hampshire (he stayed there for 2002 to 2006), Farhart also worked as physiotherapist of Australia. He has also worked for New South Wales (where he was head physiotherapist from 1990 to 2009) and Sydney Sixers. He has also worked with Australian football and rugby teams. However, his most significant stint came with Australia, with whom he toured England, Pakistan, New Zealand, and India. Pragyan Ojha: ‘I do not want any international cricketer to suffer like me’

No stranger to India: Though Farhart is settled in Australia, but he has been a familiar face among Indian cricketers. He had worked as the physiotherapist of Kings XI Punjab (KXIP) in Indian Premier League (IPL). 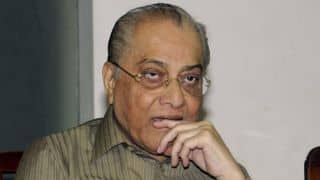 Jagmohan Dalmiya: Purpose of Declaration of Interest is to reaffirm the principle of transparency