Pramod Therayil, a native of Malappuram district, Kerala, was working as an electrician.

A 32-year-old Indian died of heart attack while playing cricket here on his wedding anniversary. Pramod Therayil, a native of Veliyankode in Malappuram district, Kerala, was working as an electrician in a contracting firm in Madinat Khalifa North at Qatar’s capital, one of his friends said. While playing the sport Friday morning, Therayil was fielding when he complained of chest pain. He collapsed immediately and was rushed to a nearby hospital.

Therayil, however, died en route to the hospital, his friend was quoted as saying by Gulf Times. The death came on his wedding anniversary. Therayil was blessed with a child earlier this year and had returned from a vacation only about two months ago, after seeing his newborn child. Efforts are being made to send his body to his native place in India. 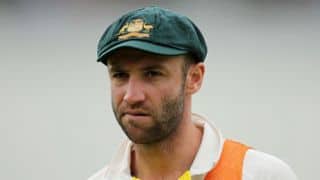 Phillip Hughes' family thanks Australia for tribute during 1st Test

Phil Hughes's family thanks supporters in Australia through newspapers