When India women slipped from 154 for 1 to 168 for 5, they wouldn’t have fancied getting anything over 200. Then a few cameos took them to 213 for 7. It was still not a challenging score, but what followed made the total appear daunting for South Africa women. The hosts folded for 125 as Jhulan Goswami, Shikha Pandey and Poonam Yadav ran through them. India, hence, took a 1-0 lead in the three-match series courtesy a thumping 88-run victory at Diamond Oval, Kimberley.

South Africa were never in the chase in pursuit of 214. Their innings failed to take off after Shikha’s early breakthroughs. Soft dismissals, errors in judgment and inability to force pace off some accurate bowling led to their downfall. While Shikha removed Lizelle Lee, Trisha Chetty and Mignon du Preez, the spinners gave nothing away in the middle overs and added pressure.

Dane van Niekerk (41) provided resistance before being sent off by Rajeshwari Gayakwad. Marizanne Kapp, the second highest run-scorer, departed for 23 to Poonam. Jhulan, who earlier become the first woman to the 1,000 run-150 wickets double, wrapped up the innings accounting for four lower-order scalps.

Electing to bat, India got off to a good start. From 154 for 1 they conceded the momentum due to a lower-order collapse.

Note: Jhulan is one away from becoming the only woman to claim 200 scalps. Legendary! 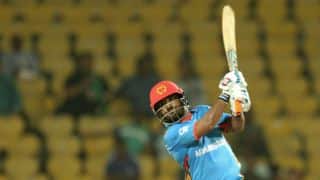