India women elected to bat after winning the toss at Diamond Oval, Kimberley.

In India women’s South Africa tour opener, Smriti Mandhana fell short of her first hundred against South Africa (and third overall). From 154 for 1, Indian Eves collapsed to 168 for 5. They eventually managed 213 for 7, and will be blaming their lower order for a meek surrender after good start by Smriti and skipper Mithali Raj. South Africa will fancy a moderate chase unless spin duo Poonam Yadav and Rajeshwari Gayakwad turn the tides.

Electing to bat, India got off to a desired start. Punam Raut and Smriti looked solid, and added 55 inside 15 overs. Then Punam perished for a 47-ball 19. Shabnim Ismail and Marizanne Kapp were disciplined, but the bowling attack found the going tough amidst a brisk stand between Mithali and Smriti.

Mithali timed the ball well, whereas Smriti changed gears swiftly. She was striking at around 75, and neared a ton. Nonetheless, she departed against the run of play on 84. She had started the 2017 World Cup with back-to-back hundreds. Hopefully she won’t run out of steam post her early heroics here at Kimberley!

Mithali’s dismissal off Masabata Klaas changed the course of the innings. She was to handle the bulk of scoring after Smriti’s fall, but failed to read Klaas’ delivery. Just like the World Cup final, India’s lower order faltered once again. Two run outs in the form of Veda Krishnamurthy and Deepti Sharma added to the pressure.

Harmanpreet Kaur, Sushma Verma, and some hits from Jhulan Goswami and Shikha Pandey propelled the score past 200, but the Eves will like to address their lower-order woes at the earliest. For South Africa, Khaka finished with 2 for 47, and Kapp with 2 for 26.

The Eves lost their group stage encounter versus South Africa in 2017 World Cup. They will definitely want to turn things around as soon as possible. 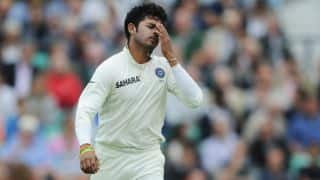