Meanwhile, Sunrisers Hyderabad star bowler Bhuvneshwar Kumar said the victory against Delhi Daredevils was due to the collective efforts of the team.

Hyderabad: Two dropped catches cost Delhi Daredevils (DD) the game against Sunrisers Hyderabad (SRH) in the Indian Premier League, said assistant coach Pravin Amre. “On this wicket, we batted well in the powerplay by getting 60 runs. I think that was very crucial. Prithvi’s (Shaw) knock was so critical to give that foundation. But we were 10 runs short in the end,” said Amre after the match yesterday night.

After that also, we came back strongly. In seven overs we did not give a single boundary to them. I think the match was on. The saying is that catches win matches. We dropped two crucial ones, he said, referring to the dropped catches of SRH opener Alex Hales and key batsman Yusuf Pathan.

Opener Alex Hales (45 off 31 balls) was dropped by Glenn Maxwell at deep mid-wicket boundary off Avesh Khan when the batsman was on 9. Pathan’s dropped catch by Vijay Shankar was one of the game changing moments during the chase. SRH won the match by seven wickets with a ball to spare.

“Really disappointed. Because, we fought very well. We were beating SRH on their home ground. I must give credit to our batting unit. We all know that this year SRH bowing unit is doing great job. I think scoring those runs I think, because of fielding, we are the losing side,”Amre said.

Hales went on to score 45 after his catch was dropped, he said, regretting that the team had also practiced fielding.

“Prithvi is a special talent. I personally know him since he was a 14-year-old. From the school days, he was making headlines, scoring 500 runs and coming in a first class, scoring that debut 100 for Mumbai Ranji and then four consecutive 100s at first class level. That matters to me. It’s not like a T20 game. How you play in a first class match, that really counts,” he said.

Meanwhile, Sunrisers Hyderabad star bowler Bhuvneshwar Kumar said the victory against Delhi Daredevils was due to the collective efforts of the team.

“Why it (win) is important because, if you look at last three, four matches, we were winning from our bowling. But, this match, the batsman won us the game. If you look at as a team unity, it’s a perfect win for us. Because, bowlers won us the matches. Batsmen winning us the matches. So, it’s a complete team performance,” he said.

Kumar, who missed recent matches due to fitness issues, said he was feeling fit. “That’s why I am playing the match. There was a niggle in the last few matches. I did not play. I felt fit before this match,” he said. 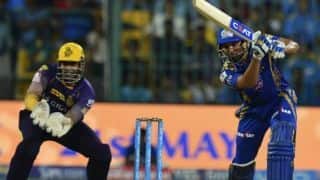