VIVO IPL 2018 saw another close finish in match 12, at IS Bindra Stadium. Chennai Super Kings (CSK) were chasing 198 against Kings XI Punjab (KXIP). MS Dhoni‘s unbeaten 79 almost took CSK almost over the line before Mohit Sharma’s emphatic last over curbed the Yellow Brigade’s winning streak in the current edition. Earlier, Chris Gayle and KL Rahul’s 96-run opening stand had ensured a healthy total on board. Chennai curbed the run flow in the death overs only to eventually go down by 4 runs.

Chasing 198, CSK looked upon Shane Watson for another flourishing start, as he had done against Kolkata Knight Riders (KKR). Watson had a new partner in Murali Vijay. The ploy didn’t work: Watson perished off a back-off-the-hand slower delivery off Mohit. Vijay slammed a six off Barinder Sran but didn’t last long. He fell prey to the knuckle ball off Andrew Tye.

CSK needed a partnership at this stage, but Ravichandran Ashwin came to the fore. Sam Billings, hero of CSK’s last match, was trapped lbw off the KXIP skipper. Billings went for the sweep, exposed his stumps, and missed a quicker one completely. The umpire signalled the runs to the batsman’s credit, but Ashwin reviewed immediately: there was no bat involved.

Ambati Rayudu was joined in by Dhoni. Sensing the need of a vital stand, the duo milked the gaps and found boundaries at regular intervals. Rayudu, on 49, was getting into the groove but was stunned by an Ashwin special. This time Ashwin never known for his fielding hit the timber with a direct throw from mid-off, leaving Rayudu way short of the crease.

CSK struggled from thereon. Ravindra Jadeja, promoted ahead of Bravo in order, probably to maintain a left-right combination, took time to get going. Dhoni was timing well, but went down with a back problem. While that might have cut down the odd single, his sheer power ensured that CSK stayed on track.

Dhoni was calm and composed (nothing obvious there) and did not take undue risks till the last over. The run rate rocketed to 14, and even 15. Jadeja managed a 13-ball 19, but Dhoni shifted gears courtesy a massive over off Mohit. He got to his 18th IPL fifty with a replica of the 2011 World Cup winning shot.

Andrew Tye came on, but Dhoni read his canny variations wonderfully. The helicopter was unleashed, sending the crowd into ruptures and silence at the same time. A last-minute change in bat angle and supremely strong bottom-hand had turned the chase by then.

With 17 to score off 6 balls, Mohit continued to bowl wide yorkers outside off. Dhoni got a four, but could not keep things going. It became too much of a task, and Mohit prevailed. 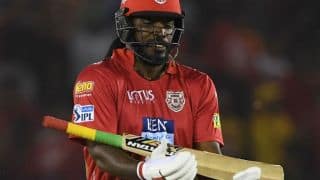