Delhi Daredevils (DD) had a fairytale comeback in Match 26 of ongoing VIVO IPL 2018 against Kolkata Knight Riders (KKR). Andre Russell’s fireworks had them towing hard between over 9 and 15, but a 55-run victory has brought their campaign right on track after Gautam Gambhir’s resignation from captaincy. Earlier, newly-appointed skipper Shreyas Iyer‘s unbeaten 93 and Prithvi Shaw’s 62 had propelled DD to 219 for 4 their second-highest score overall.

Chasing 220, KKR lost wickets in clusters in the Powerplay overs. Chris Lynn perished early for misjudging the length of Glenn Maxwell. Sunil Narine fancied his chances, but his stay was limited to a 9-ball 26. He took on Trent Boult and Maxwell before falling prey to a well-executed short ball from the former. He was caught cramped for room.

Robin Uthappa surrendered to another short delivery from Boult. This way, the New Zealander regained the Purple Cap as well. KKR’s middle order have stood the test of time, but that wasn’t the case tonight. Nitish Rana and skipper Dinesh Karthik added 26 runs between them to add to KKR’s woes.

Russell began his onslaught at 77 for 5. He was ably supported by Shubman Gill, who took calculative risks. Russell spoiled Avesh Khan’s spell and attacked Rahul Tewatia and Boult. He was smart enough to use the pace of the ball and hammer everything dropped short and full.

Unfortunately, Russell ran out of company after Gill was run out. A mammoth 220-run chase became too much for him. Perhaps KKR could have brought him ahead. Or perhaps they could have resorted to him or Narine, and not the inexperienced Mavi, to bowl the last over. Mavi leaked 29 off the last over.

Overall, it was a forgettable night for KKR. This was their the worst performance against DD. Are these signs of things to come for DD?

Iyer couldn’t have hoped for a better start to his captaincy stint. Meanwhile, Gambhir may continue to warm the benches. It seems like he has suddenly taken a lot of blame up his sleeve, and been made the scapegoat. Something to think about…

Player of the Match: Shreyas Iyer. 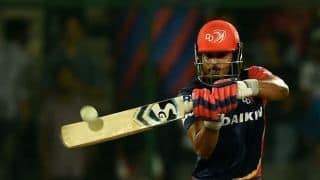