In Match 47 of VIVO IPL 2018, Mumbai Indians (MI) have set Rajasthan Royals (RR) a target of 169 at Wankhede Stadium, Mumbai. Opting to field, Ajinkya Rahane almost rued his decision when MI openers took the score to 86 for no loss after 10 overs. However, RR — for the first time in the season — picked up 3 wickets in the middle overs. As a result, they restricted MI to 168 for 6. MI’s late onslaughts was provided by Hardik Pandya.

MI started in style. Suryakumar Yadav commenced aggressively, and made full use of the Powerplay overs. Evin Lewis, on the other end, was struggling to kickoff. He was going at a run a ball; after 5 overs he had scored 14 off 13 balls. However, Surya took the initiative at this point, though he lost some steam later, not for the first time in the current edition, after 6 overs. At this point Lewis opened up by accelerating against Shreyas Gopal, Dhawal Kulkarni and Jaydev Unadkat. The fielding was erratic, and there were full-tosses on offer as well.

Rahane brought on Jofra Archer after the 10th over. Archer got two wickets in successive deliveries: Surya (38) top-edged a pull and Rohit middled a hook (first ball, for the second time against RR this season), and both were caught by Unadkat at deep fine-leg. Before that, Surya scored the most runs (476) by an uncapped Indian player in a single IPL season.

Irrespective of the flaws, RR kept fighting. From 87 for 0 MI were reduced to 131 for 5 in 17 overs. Lewis, Ishan Kishan and Krunal Pandya all perished, trying to loft the ball. They got only 40 from the last 4 overs, mostly from Hardik’s blade. 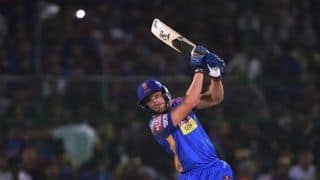