Delhi Daredevils (DD) registered a fairytale comeback in Match 26 of ongoing VIVO IPL 2018 against Kolkata Knight Riders (KKR). Despite Andre Russell s late fireworks, a 220-run chase was too much to ask for visitors at Feroz Shah Kotla, Delhi. DD pulled off a 55-run victory, and have brought their campaign right on track after Gautam Gambhir s resignation from captaincy. Earlier, newly-appointed skipper Shreyas Iyer s unbeaten 93 and Prithvi Shaw s 62 had propelled DD to 219 for 4 their second-highest score overall. This was also their biggest victory in terms of runs against KKR.

Iyer also lauded Shaw, who became the youngest to a IPL half-century: “He has been really batting well since the start of the season. It is always important how he is starting off. Colin Munro at the top with him added 50 runs. ”

“Liam Plunkett is my go-to guy. He came up to me and told me he wants to bowl the 16th or 17th over. And I really like it when my bowlers come up to me and tell me that they want to bowl,” concluded the debutant skipper.

With a thumping victory, in absence of Gambhir, are these signs of things to come for DD? 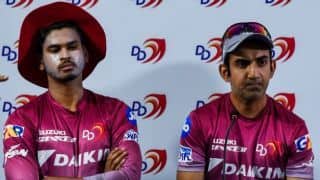