Sunrisers Hyderabad (SRH) locked horns with Kings XI Punjab (KXIP) in Match 16 of ongoing VIVO IPL 2018. The latter, till then, hadn’t won a single home match versus the opposition. That night the script changed owing to (Chris) Gayle storm. The Universe Boss’ unbeaten 104* led KXIP to 193 for 3. In reply, SRH were restricted for 178 for 4. Now both sides meet once again for the reverse tie, to be hosted by Rajiv Gandhi International Stadium, Hyderabad. Will the script change this time around?

SRH won accolades for a much-spirited show versus Mumbai Indians (MI) at Wankhede Stadium on Tuesday. Defending a mere 119, SRH bowlers chipped in together and were led magnificently by skipper Kane Williamson. As a result, MI bundled out for 87 in 18.4 overs. Before this match, SRH had won three consecutive encounters and lost two in a row. A well-oiled SRH squad have bounced back in style, and will push harder against in-form KXIP at home.

KXIP, on the other hand, are also coming on the back of an impressive win versus Delhi Daredevils (DD); defending 144 at Ferozshah Kotla. Gayle’s absence led to a moderate score from the dugout. KL Rahul and Karun Nair contributed but others failed to stand tall. KXIP would be eager for more contributions from the lower order going forward.

In T20 cricket, we always talk about batsmen from both the camps. This clash may well be an exception with some very smart bowlers in Shakib Al Hasan, Siddharth Kaul, Bhuvneshwar Kumar/Sandeep Sharma, Ravichandran Ashwin, Mujeeb Ur Rahman, Andrew Tye, Mohit Sharma etc. Overall, a gruelling battle awaits between bat and ball at Hyderabad.

**Bhuvi’s fitness may lead to an unceremonious exit for one of the Indian pacer. Or will SRH come out with a batsman less?

Note: Nabi and Rashid have played 4 matches together for SRH. The Orange Army have won all such encounters.

SRH hold edge with overall head-to-head record in their favour. In 11 matches, SRH have won 8 and lost only 3 versus KXIP. Current form doesn’t separate both camps a lot. Clash of the titans on cards. Definitely should go down the wire. 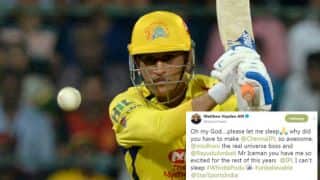